TIFF 2013 | The Last of the Unjust (Claude Lanzmann, France/Austria)—TIFF Docs 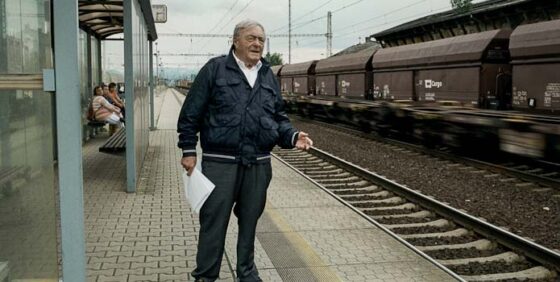 Claude Lanzmann’s last reworking of leftover materials from the rich archive accumulated for his groundbreaking epic Shoah (1985), The Last of the Unjust breaks with the rigorous approach its director previously employed to find a just way to talk about the Nazis’ mass murder of the Jews with film, including hitherto strictly avoided photographs and material from the hateful propaganda film Theresienstadt. Ein Dokumentarfilm aus dem jüdischen Siedlungsgebiet (1944), also known as The Führer Gives a City to the Jews, which posits the Czech concentration camp Theresienstadt as benevolent “model ghetto.” Like previous annotations, Lanzmann’s new work—his biggest and longest since Shoah—adds a new perspective to his mammoth Holocaust investigation and does conjure a complex portrayal of Viennese Rabbi Benjamin Murmelstein and his controversial role as last (and only surviving) “Elder of the Jews” in Theresienstadt, using a 1975 interview with a spellbinding Murmelstein, testifying to the man’s remarkable memory, intelligence, wit, and education. (The film’s title stems from his self-description; in another remarkable instance Murmelstein describes himself as a “calculating realist…a Sancho Panza in a crazy world of Don Quixotes.”) The counterpoint comes in Lanzmann’s usual contemporary landscape shots of the sites of atrocities and memories, many times traversed by the director himself reading excerpts from Murmelstein’s 1961 book Terezin, il ghetto modello di Eichmann, which recounts his history in an entirely different tone.

As the film progresses, it becomes clear that The Last of the Unjust is also a self-portrait of Lanzmann, now 87, befitting a veteran trend otherwise represented by a couple of Quinzaine elders—85-year-old Marcel Ophüls’ amusing, though hardly amazing anecdote anthology Ain’t Misbehavin’ (Un voyageur) and The Dance of Reality, a baroque and dazzling comeback for Alejandro Jodorowsky, now 84. During the final passages, Lanzmann’s presence as interviewer becomes more prominent: at 52, he gives a dashing impression, with playboy-like sunshades and leather jacket, smoking, his laid-back demeanour punctuated by visible amusement. When they walk off gracefully, it’s a reminder that Lanzmann is looking back at a time when he was recording and bearing witness for the people who had endured the Holocaust, when their memory was alive. Now they’re gone, and he remains, the film’s title suggesting that he has become The Last of the Unjust. But as Rithy Panh (The Missing  Picture), a director clearly influenced by Lanzmann, has successfully demonstrated, the excavation of history continues.

Claude Lanzmann, The Last of the Unjust, TIFF 2013