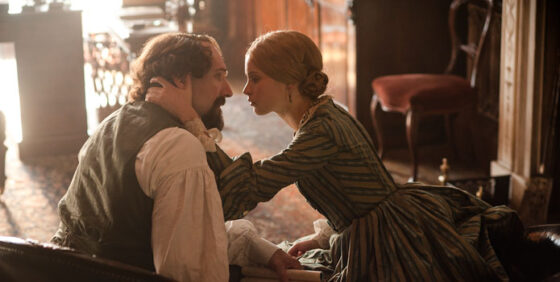 While Coriolanus seemed designed to show us that Ralph Fiennes could direct as well as star in Shakespeare, The Invisible Woman scans as a cannier power play, a consistently underrated actor-director’s audition for high-toned costume dramas about major historical figures (Charles Dickens, here). As a director’s portfolio, it’s not so bad: certainly Fiennes proves himself more capable of this sort of middlebrow period recreation than fellow countryman Tom Hooper, who never met a pair of nostrils he didn’t want to jam a camera in. Fiennes’ framing is more classical, the better to take in the art director’s impeccable recreation of the drawing rooms, commercial theatres, and lecture halls of Victorian London, where a still-married Dickens (Fiennes) begins a tentative romance with actress Nelly Ternan (Felicity Jones).

The title, borrowed from Claire Tomalin’s biography of Ternan, suggests a spotlight on the ruined other woman, which The Iron Lady scripter Abi Morgan is all too happy to deliver in a number of on-the-nose monologues about men’s versus women’s freedom. But Fiennes’ attentions lie elsewhere: for one, he’s too keen on old Boz as a bon vivant and benevolent god to let him play second fiddle to his less proven female co-lead. He’s also got his filmmaking chops to prove, in grandstanding set pieces like a sweaty courtly dance that bows to Visconti, and the odd anthropological cutaway of housekeepers folding laundry. These asides are well-observed, but they’re ultimately distractions, relegating poor Ternan (and Jones, a warm but under-utilized presence) to the background of her own story.