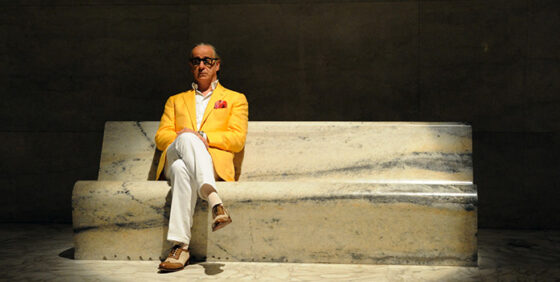 Paolo Sorrentino has become a sort of go-to Italian auteur for the current regime in Cannes, without having a great deal of support elsewhere. Unlike some members of the International Cinema Scope Cabal™, I have remained somewhat agnostic toward Sorrentino, who is undoubtedly talented but committed to working in a highly unfashionable mannerist mode. (We could perhaps slot him alongside such wide-angle Saxons as Terry Gilliam and, when they’re in extremis, the Coens; Kusturica is a distant Serbian cousin.) The style is distracting and frequently obscene, but that’s not necessarily the mark of a charlatan; occasionally, as in Il Divo (Sorrentino’s best film), a funhouse distortion of reality is what’s called for.  There, the writer-director’s predilection for gargantuan, fascist space and disorienting, dipsy-doodle camerawork is pretty clearly his response to Berlusconi’s culture of all-consuming hideousness, an attempt to plunge into the ugliness and come out, if not on the other side, at least more undeniably at the centre of Hell.

It’s not coincidental that Sorrentino’s most poetic film, This Must Be the Place, was the result of his sojourn to the good ol’ U.S. of A. Freed of the weight of Italian bunga-bungocracy, he could explore open spaces and, finally, kill the Nazis where they slept. It was an empty film, convinced that it was replete with meaning, but it was certainly a noble failure. By contrast, The Great Beauty finds Sorrentino going so far into the mythologies of his nation that he loses all perspective, spitting out an incoherent pastiche of Fellini (La Dolce Vita in particular) with a dash of accidental, toothless Tomás Gutiérrez Alea (Memories of Underdevelopment) dropped in as counterpoint. The story of washed-up writer and professional partier and gadfly Jep Gambardella (Toni Servillo), The Great Beauty is also an alleged condemnation of the decadence of Rome and its high society, but inasmuch as it approaches coherence at all—and indeed, parts of this film are “elliptical” to the point of incompetence—Jep is a sexist, classist fool whose point of view Sorrentino never bothers to problematize. We can tell that Jep is an unreliable enough narrator, but The Great Beauty clearly wants us to believe that his disaffection is a perfectly logical response to the rubbish of modern life, and that his sudden emotional breakthroughs are reason enough to hold him in higher esteem than the phonies surrounding him. Sorrentino’s ultimate point seems to be that contemporary Italy has become a kind of Spring Breakers for the geriatric set, and only the man callow enough to recognize how pathetic it all is deserves our respect. (Also, he prefers classical statuary to performance art, so clearly he’s our designated crap-cutter.) What nonsense.