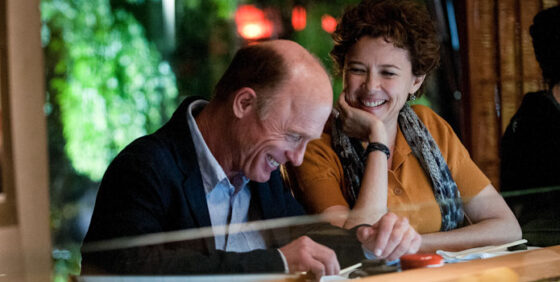 The face in question, arresting baby blues set within those weathered, wizened features, belongs to Ed Harris. A curious choice of visage to represent such a concept, to say the least, especially considering the crazed look Harris sports while making his entrance, which is also an exit, as the first of the two characters he portrays in The Face of Love perishes in the sea during a Mexican holiday, making a widow out of wifey Annette Bening, who told him not to smoke dope before going for a swim.

Harris II washes up on the shores of Bening’s quietly enduring grief some years later, and the resemblance to his first character is, of course, striking. He not only looks like the dead man but laughs like him, makes love like him, and is maybe even a kind of improvement: where the deceased was an art collector, this new Harris is a genuine painter. The whole thing certainly throws Bening for a loop, but what the hell? She gets to fall in love with her husband all over again.

Laden with mirrors and always only almost a ghost story, Arie Posin’s second feature bears more than a vague resemblance to Kieślowski (Bening even cuts her hand with a broken glass, echoing Juliette Binoche’s memorable knuckle drag in Blue) and also recalls Jonathan Glazer’s Birth, though the tone has more in common with the Keanu Reeves-Sandra Bullock weeper The Lake House. Bening is remarkably committed, often moving (at times she even suggests Joan Bennett), but the material repeatedly shies away from the eeriness and unease the intriguing premise deserves—this could have been melodrama of a higher order. The dialogue is marred by spells of bogglingly bad exposition, and Posin’s approach gradually succumbs to a general gooey softness where some detached distance may have enriched its emotional textures. It also has Robin Williams, bafflingly cast as Bening’s pining neighbour. All kinds of weird.