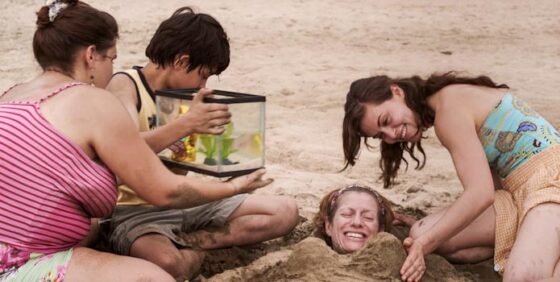 Amazing is certainly pushing it, but Claudia Sainte-Luce’s debut feature (photographed by Claire Denis’ regular shooter Agnès Godard) has enough craft and intelligence to render its sentimental story about coming out of one’s shell more charming and inventive than one would expect. Set in Guadalajara, the film follows an unlikely product demonstrator who’s lured out of a life of near-total isolation when she befriends an ailing mother of four and quickly finds herself absorbed into an unruly family. None of the kids’ three fathers are in the picture, so when it’s revealed that Mom is dying, our heroine gradually finds herself becoming something of a surrogate-in-waiting.

Reduced to a synopsis, The Amazing Catfish could be Garry Marshall material, but the film is mercifully low on ingratiating cutesiness. Sainte-Luce cultivates a quiet personal style that’s attentive to behaviour and big on deadpan humour of an exceedingly Mexican variety—even the most transitory elements (e.g., radio horoscopes playing in the car) are pretty funny. The pleasures here are all in the well-curated cultural details, in the growing sense that familial roles are fluid and dictated by necessity, and in Ximena Ayala’s central performance, which tempers a sort of silent-comedy mooniness with careful attention to the execution of individual tasks.