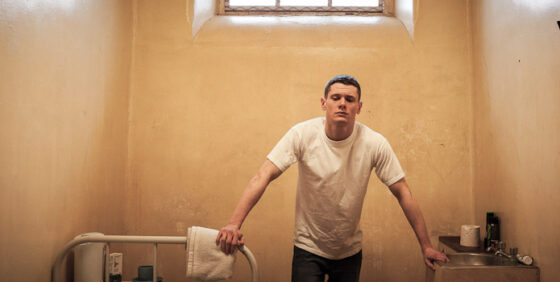 British. Prison. Drama. Say it and sigh: Where can the genre go, post-Scum, Porridge, Bad Girls, Ghosted, Screwed, Hunger? Nonetheless, David Mackenzie (Young Adam) makes a gritty bid for the pantheon with this initially lean and suitably mean rendering of a typically corrupt prison system where inmates are predestined for internecine feuds and cigarettes, cellphones, and verbal barbs constitute the medium of exchange. When ex-juvie Eric (Jack O’Connell) is “starred up” to an adult facility, his processing ritual is harsh yet habitual to the point of a welcoming rite, such is the feral boy’s casual enthusiasm at the prospect of promotion—as well as the prospect of reuniting with his similarly incarcerated father, a fellow inmate of 14 years. As Eric assumes his position within the piss-yellow walls of his cell, he wastes no time fashioning a weapon from a shaving razor, the process recorded in such exacting detail as to momentarily validate Mackenzie’s avowed Bressonian influence. But however despoiled the environs or brutal the violence, what prison drama doesn’t inevitably devolve into little more than the starkest kind of melodrama? Starred Up, sadly, is no exception: as Eric uncoils with ferocious energy into a sardonic, adversarial beast, attempts among inmates and a willfully stationed group counsellor to quell him begin to upset the ward’s carefully structured hierarchy, within which is an Oedipal conflict begging for resolution. Compelling for its relentless cycle of violence hitched to Mackenzie’s agile shooting style and performances that are ably up to the task, Starred Up earns its nasty streak, but ultimately succumbs to an almost extravagant level of peripety—something that a little discipline can’t ultimately correct.