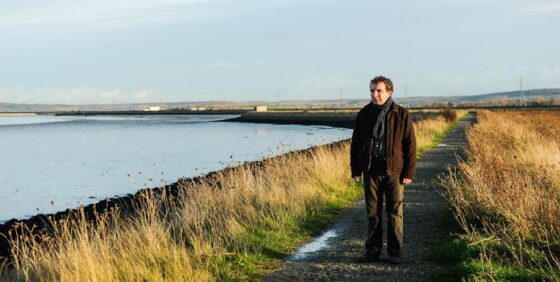 In evaluating Southcliffe as a TIFF entry, I find myself thinking back to one of Jonathan Rosenbaum’s very best lines of criticism: “Why insist on treating good baba ghanoush as if it were bad peanut butter?” We might then be forced to ask what we do, as gourmands or as critics, when our suppliers deliberately mislabel the goods. Southcliffe is only the latest example of a growing trend of showcasing TV shows as “features” within a film-festival context. There are clear reasons why this is happening: the wholesale embrace of DCP over film means that TV and cinema can be presented as “equal” in terms of medium. We are living in an age of the “showrunner” (e.g., Vince Gilligan, Matthew Weiner, Dan Harmon) as tele-auteur, and more and more premium channels are hiring upscale cinema folk to make TV miniseries that exhibit varying degrees of cinematicity (Todd Haynes’ Mildred Pierce, Jane Campion’s Top of the Lake, and Penance by Kurosawa Kiyoshi, which was featured at TIFF last year).

But TV isn’t cinema. Southcliffe, a four-part Channel 4 series directed by Sean Durkin (Martha Marcy May Marlene), is difficult to evaluate because of the decision to move it from its native medium and hold it to the standards of another, where it falls woefully short. Granted, I am not a TV critic, and so I would not deign to discuss Southcliffe in that regard, but as an ordinary viewer I found the miniseries format to have problems not unlike those of narrative shorts: too much information crammed in a space that didn’t permit breadth or development. A story about a troubled veteran (Sean Harris) who goes on a killing spree in his sleepy Yorkshire village, the program traces the resonances of his acts across multiple characters, occasionally looping back in time to better explicate the full impact of both the killer’s decisions and the traumas he inflicts. Durkin shows admirable control: much of the action transpires without incidental music, and he frequently underscores tension with slow pans and zooms, much as he did in MMMM.

All the same, Southcliffe promises much more than it can deliver. Many scenes focus on a London news reporter (Rory Kinnear) who grew up in Southcliffe and seems to have a score to settle with its inhabitants. His father was blamed for an industrial accident, and there was bullying involved, but for all the screen time he receives, there’s a nagging vagueness to his beef. Similarly, the family life of the victim’s parents (Shirley Henderson and Eddie Marsan) begins to unravel in ways only tangentially related to the loss of their daughter. Durkin and writer Tony Grisoni want to imply that the gunman only lanced a wound already festering in the town (not a particularly complex or original thesis), but with so many characters trying to arc in four 45-minute blocs, we eventually end up with the sort of histrionics that derive less from comprehensive character development than the need for decisive episode endings.

And this is the fundamental problem: a work of cinema would probably strive to do less, and hit the mark, or not be cued to predetermined episodic beats. But now, we seem to be treating TV series as if they were long films, and assuming they are accordingly complex and nuanced. This is a misunderstanding of the compositional dimension of time-based art, to say the least. If longer equalled richer, then One Day at a Time is approximately eight times the achievement of Sátántangó.