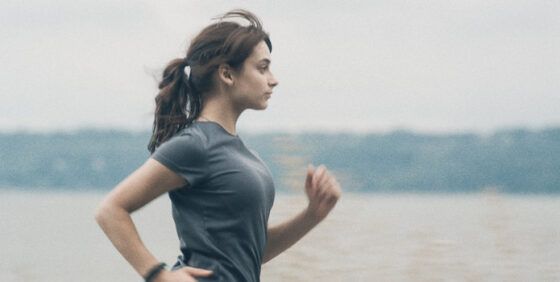 Oh yes indeed, Sarah prefers to run. She prefers it to having articulate conversations, displaying recognizably human emotions, or demonstrating a capability to see her actions as connected to the larger world in any way. This character study of a young Québécer (Sophie Desmarais) whose track-and-field skills get her a spot on the McGill varsity team (and a shot at a brighter future) doesn’t stray too far from the standard template. She comes from a poor family, and small-town suburban life hasn’t entirely prepared her for the challenges of Montreal. She moves there with a male roommate (Jean-Sébastien Courchesne) who discovers that they can receive government monies through a marriage of convenience that, not surprisingly, eventually becomes a little something more to him.

But the main problem with Sarah is the fact that Robichaud writes and directs the title character as a doe-eyed cipher who only understands how to run, run, run. The film, frustratingly and a bit offensively, falls very much in line with the “Asperger’s chic” that is plaguing art houses and festivals worldwide. Since psychological impenetrability differentiates art film from commercial movies, and as the subject’s impenetrability thwarts the efforts of those around her to try and connect with her, you have conflict without sentimentality, a win-win for an up-and-coming mid-rank auteur. One particular moment, during which a student valiantly tries to interview Sarah for a profile in the McGill student paper, yields unintentional hilarity; the late-film reprise of said interview, when Sarah has been transformed into a fully functioning individual because she has now had sex with a man, is just patently offensive.