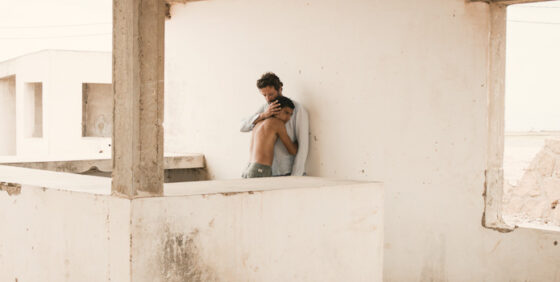 In a perfect world, film festivals would be filled with debut films as disciplined and poetic as Salvation Army, a film that first-time director Taïa adapted from his own autobiographical novel. This fact alone should be cause for consideration: How many filmmakers wallow in the self-indulgent excesses of autobiography? So few are capable of accomplishing what Taïa does here, which is to regard his own story with relative objectivity. His young on-screen surrogate (Said Mrini), first seen growing up in a large family in Morocco, is shown negotiating various structures which are supra-individual and which exist neither to victimize him nor to inculcate him into adulthood. He sneaks away from his troubled clan to hide in abandoned buildings and have sex with random men, his lack of affect alerting us to Abdellah’s recognition that desire operates within an economy, emotional engagement being only a secondary concern (at best). When the film skips ahead to the adult Abdellah (Karim Ait M’hand) and his relationship with a Swiss professor, we can witness the impact of these early lessons of gender and ethnic inequality on the grown man, as he attempts to transition from opportunist to stable citizen in a society that still views him with suspicion. Salvation Army avoids the usual pitfalls of political cinema, precisely because Taïa is able to remain focused on particulars, the overwhelming feel of things. (Agnès Godard’s cinematography certainly helps in this regard.) But at the same time, Taïa makes sure that we see those specifics as nodes within objective historical formations, in which there are no enemies or smug tellers of truth, only people trying to make their best available move.