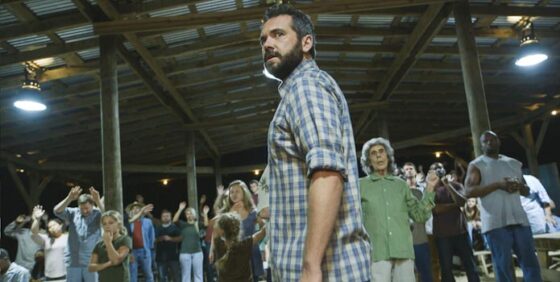 In which a cult filmmaker spikes his own Kool-Aid. Ti West’s sloppily made and surpassingly tasteless movie slaps a Vice logo on its account of American documentarians investigating a secretive Caribbean commune. But even if the found-footage textures aren’t really supposed to fool anybody—not unless Joe Swanberg and Kentucker Audley have suddenly quit their day jobs to become crusading freelance journalists—The Sacrament still feels like an attempt to cash in on a played-out trend. Yet the sins of its shaky-cam aesthetic pale in comparison to its incoherent attempts at social commentary, which, if I read the movie correctly, is to use the iconography of Jonestown to put across the thesis that off-the-grid demagoguery is a dangerous thing—a newsflash that doesn’t give off much illumination. If West and his collaborators (including producer Eli Roth) mean to use “Eden Parish” and its scripture-quoting head honcho (the admittedly excellent Gene Jones) to caricature the self-wounding isolationism of the Tea Party, they don’t get much out of it; and if having Jones’ fascist “Father” cite Malcolm X and Bobby Kennedy as his heroes is meant to be embedded lefty satire—a self-portrait seen in a funhouse mirror—one suspects the joke will be lost on the gore-hound audience. In The House of the Devil and The Innkeepers, West showed a modest but developing talent for old-school horror-movie atmospherics, marking him as a filmmaker to watch going forward. The Sacrament, which is never ever scary in addition to not being any good, is the artistic equivalent of two steps back.