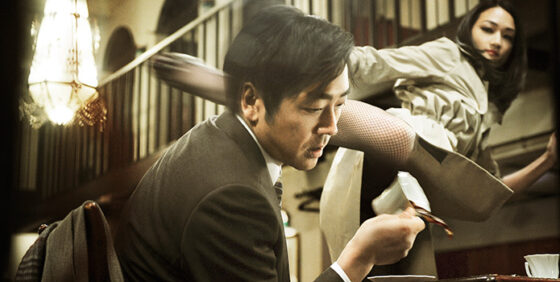 Based on Matsumoto Hitoshi’s track record as both a filmmaker and comedian, we have every right to expect the unexpected. But what’s most surprising about his latest film is the fact that he has chosen to take an ostensibly outré subject (sadomasochism) and turn it into a bland mainstream adventure-comedy. To be sure, there are dollops of off-the-wall humour and genre-bending surrealism in R100. (The title, for instance, is a tongue-in-cheek rating for the film we’re watching, which is also being screened within the film for producers and censors; the implication is that no one under 100 will be admitted, so insert Manoel de Oliveira joke here.) Matsumoto could probably never make a straight-ahead film even if he wanted to, but here, all the delightful bits of business—the self-reflexivity, the bone-dry salaryman foibles, the sudden appearance of Office-style interviews among the assorted dominatrices—are attenuated by a hopelessly tedious A-plot.

The premise, at least, is mildly promising. Takafumi (Nao Ohmori), a salesman dad whose wife is in a coma, signs up for a year’s subscription to a bondage service; the ladies just pop up out of nowhere in daily life to kick the shit out of him, and all is good until they being crossing over into his work and family life. But the problem is not just that Takafumi isn’t a compelling character—he wouldn’t need to be anyway, if Matsumoto treated R100 like a manga. The problem is that this dominant thread is so unimaginatively rendered that there’s little to do except trainspot all the possibly-unintentional references. (“Oh, this is like Fight Club meets The Game.” “This is sort of like the point in Audition when it goes from Ozu to torture porn.” “I think this is his Sono Sion riff.” Etc.) I suppose one could read R100 allegorically: the boredom of life (the film) is momentarily ruptured by bits of jarring, interstitial business (the S/M attacks). But then, if that were the case, they would take control of the film, which they most certainly do not. What does take over is “The Queen of Gobbling,” about which the less said the better. As one of the angry producers protests, “Is that even an S/M thing?” No, but it’s a cheap way to tie up loose ends.