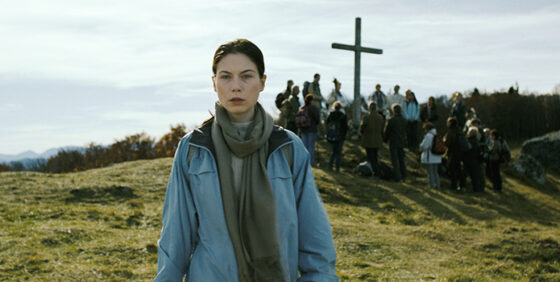 Though hardly as adventurous (or merciless) as some of his Austrian peers, Götz Spielmann nevertheless created two bracing portraits of adults behaving badly in Antares and Revanche, his two most celebrated features. And just as the former film was smart enough to skirt many of the clichés of the “Hey-these-miserable-people-are-all-connected!” mode that was then on the rise thanks to Magnolia and Amores Perros, the latter Spielmann effort overcame some awfully familiar film-noir tropes thanks to its spare compositional sense and the cast’s lean, intense performances.

Alas, a similarly high calibre of acting skill proves to be the only real virtue of October November, a disappointingly drab and shapeless drama that has little of its predecessors’ power. Nora von Waldstätten stars as Sonja, a successful actress in Vienna whose smoothly professional airs and flirtatious manner with the men around her fail to entirely mask the loneliness and despair in her personal life. A confrontation with the wife of her latest lover pushes her closer to another breakdown. Meanwhile, at the country inn owned by her family, older sister Verena (Ursula Strauss) splits her time between dealing with the demands placed upon her by the ailing health of their father (Peter Simonischek) and snatching a few moments of extra-marital happiness with the dashing local doctor (Sebastian Koch). Sonja’s return to the fold prompts renewed resentments and discomfiting revelations about the family’s past.

Waldstätten and Strauss both bring strength and complexity to roles that can’t help but seem underwritten given October November’s lack of insight and tension. Perhaps sensing the inertia that mars the film from its opening scenes onward, Spielmann and regular cinematographer Martin Gschlacht intermittently abandon the elegant and carefully framed visual style of Revanche in favour of a twitchy array of pans and zooms; elsewhere, they opt for suitably dignified tableaux of quietly anguished characters amid mountainside scenery. The fleeting pleasures and painful ramifications of marital infidelity remain one of Spielmann’s go-to themes, though here he overplays it to such a degree that no single one of the many betrayals and sufferings at hand carries the weight it ought to.