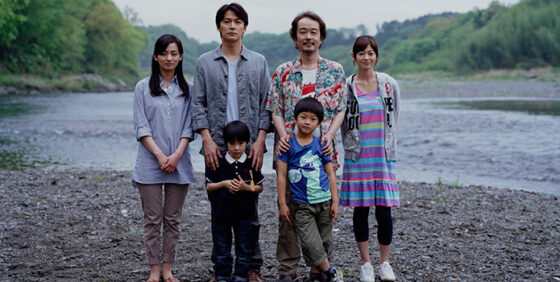 In Cannes, the word on the street about Kore-eda Hirokazu’s Like Father, Like Son was that it was the competition’s most “Spielbergian” entry—a shorthand, one supposes, for the film’s multiple fraught father-son relationships, a trope Spielberg has invoked just often enough in his own work for it to become an exhausted critical prism for examining his entire filmography. Catching up with Kore-eda’s film late in the festival, the movie that came most immediately to my own mind was Kramer vs. Kramer (1979) and its parental trench warfare in which the well-being of a child is obfuscated by the competing egos of his would-be custodians. Maybe that means Like Father, Like Son was actually the most Bentonian film in Cannes. Or perhaps, comparative matrixes aside, simply the most Kore-edan—an exquisitely controlled, intimate family drama by a director who has devoted himself more assidulously to mapping the inward- and outward-facing contours of Japanese family life than any director since Ozu.

That comparison has been made before, and Kore-eda himself has rebuffed it, saying he’s more of a Naruse man, thank you very much. (Still, he appeared alongside Jia Zhangke in Cannes to introduce the restoration of Ozu’s An Autumn Afternoon [1962]). To these eyes, Kore-eda has a gentler touch (and less interest in the lower classes) than the director of such doomed masterpieces as Floating Clouds (1955) and When a Woman Ascends the Stairs (1960)—even if, in Kore-eda’s best work (amongst which Like Father, Like Son counts) there is a sting lying in wait just below the placid surface. It has been a most curious career, including one high-concept tearjerker (After Life, 1998) so clever—Spielbergian, even—it’s surprising Hollywood hasn’t yet remade it; and, as recently as 2009, a puzzling detour into boy-meets-blowup-doll fantasy (Air Doll). There have also been a charming, Edo-period samurai drama (Hana, 2006) and an overreaching try at a big, (self-)important social allegory (Distance, 2001). But in the last decade, Kore-eda has seemed to find his true author’s voice with a suite of “family” movies that begin with the fact-based Nobody Knows (2004) and also include the semi-autobiographical Still Walking (2008), I Wish (2011), and now his latest.

These films are not exactly tatami-mat melodramas, and yet they are profoundly domestic affairs that find in the family unit the raw materials for candid and revealing portraits of modern Japanese identity. These are films fascinated by the subtle connections between people and their surroundings, how a home may come to seem an extension of the people who live there (and vice versa), and by the barriers people erect between their private and public selves, and sometimes between themselves and other members of their own household. Where Nobody Knows, Still Walking, and I Wish were all films explicitly marked by separation and loss—parental abandonment, the death of a sibling, divorce—Like Father, Like Son suggests, among other things, that sometimes people can grow even more distant from one another while still living under the same roof.

The movie turns on a premise that sounds like a blue-ribbon recipe for movie-of-the-week dross, but which Kore-eda transforms into an alternately wry and authentically moving consideration of class, morality, and the clash between traditional values and capitalist ethics (a running theme at Cannes this year, also at the root of Jia’s A Touch of Sin and Miike Takashi’s Shield of Straw). Successful Tokyo architect Ryota (Fukuyama Masaharu) and his wife Midori (Ono Machiko) learn early on in Like Father, Like Son that their six-year-old son, Keita (Ninomiya Keita), is in fact not their birth child, owing to a hospital mix-up that—in one of the film’s most intriguing conceits—turns out to have been intentional sabotage. (Coming forward with her story a half-decade late, and after the statute of limitations for the crime has expired, a contrite former nurse explains that, when she saw the family’s obvious wealth and privilege, she decided to give another baby its shot at the good life.) Meanwhile, Keita’s birth parents turn out to be Yudai (Franky Lily) and Yukari (Maki Yoko), a middle-class provincial couple who have, in turn, been raising Ryota and Midori’s actual son, Ryusei (Sho-gen Hwang).

Well before the deception has been revealed, however, Kore-eda shows us that young Keita—a somewhat withdrawn, serious, piano-playing lad—has less than a natural fatherly bond with Ryota: asked during a primary school placement interview which of his parents Keita favors, Ryota cites Midori, noting (with barely concealed contempt) the child’s unfailingly kind temperament and lack of his father’s cutthroat competitive instincts. And time and again in Like Father, Like Son, Kore-eda comes back to the age-old nature-vs.-nurture dilemma. What makes us who we are? Genes, upbringing, or some alchemic combination of the two?

Then the families meet, which Kore-eda turns into something of a master class in revealing character through action. The two fathers are almost comically polar opposites, Ryota steely and severe in his Saville Row couture, the shopkeeper Yudai a shambling bear of a man who seems entirely more comfortable interacting with children than other adults, and who announces, only half jokingly, his personal philosophy as, “Never do today what you can put off until tomorrow.” The children prove a similar study in contrasts, the joyful and gregarious Ryusei, raised with a gaggle of siblings, running circles around the shy only child Keita. The mothers are perched on somewhat more equal footing, though it’s clear that Yukari wears the pants in her family, while Midori assumes the submissive posture of a dutiful bride in a patriarchal culture. You could argue that, on some level, Kore-eda plays this all for laughs, but they are laughs earned from a close, Renoir-like attention to the finer details of human nature, and never at the expense of the characters’ fundamental dignity.

Told by their doctors and lawyers that the only viable solution is to swap children, the families agree to a trial period of exchange, with each child initially spending weekends at the other’s home to smooth the transition. Here, Kore-eda further mines the particulars of how different people construct their own disparate versions of “normal” (a seemingly obvious subject for a movie, though it’s hard to think of too many others this acutely devoted to it). Chez Yudai is a veritable whirlwind of activity and affection, where everyone bathes and sleeps communally and a small cut or bump on the head is nothing to worry about. Meanwhile, in Ryota’s sleek Tokyo penthouse, nothing is out of its place, including so much as a single unnecessary emotion. Even Midori’s elderly mother comments that she can’t bear to spend the night there—it feels too much like a hotel. At least, that is, until Ryusei comes along and begins banging furiously at the piano with cheerfully destructive enthusiasm. You would think this might prompt Yudai to ship the boy back marked “return to sender,” but rather it leads to a truly indecent proposal, shocking in its unfeeling ignorance and greed.

Kore-eda eventually expands the portrait to show us that Yudai himself is the son of an emotionally distant father, whom he in turn has kept at arm’s length, along with his father’s second wife. But once again, what might have seemed programmatic is rendered as subtle and revealing observation, the desire for a tidy resolution never forcing the narrative this way or that. (Kore-eda is, perhaps above all, an exceedingly patient filmmaker.) It is easy to dismiss—or at least damn with faint praise—a movie such as Like Father, Like Son for being too linear or classical or for wearing its heart on its sleeve (which it does, sometimes). Indeed, this is the proverbial cinema of “people talking in rooms,” or more often not talking in rooms, or at least not saying what they really mean. But Kore-eda makes of such scenes richly compelling cinema, in which the rooms themselves become characters as complex as the characters who inhabit them. A living room in a Kore-eda film is nothing if not truly alive, by turns a womb, a minefield, a window to the soul.