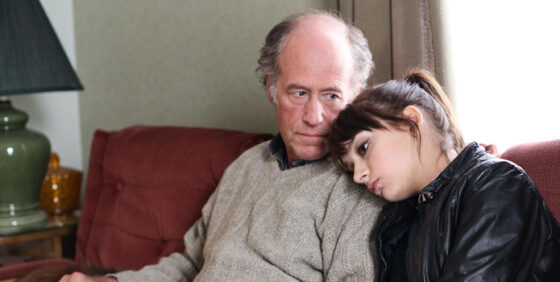 An exceptionally pokey attempt to bring King Lear (and maybe just a bit of Père Goriot) to the Québécois farmlands, Sébastien Pilote’s Le Démantèlement reduces the spectacle of patriarchal self-destruction to the level of watching a cup of tea grow cold on the table. Something happened here, but oh my, how utterly boring. The picture of taciturn in extremis, farmer Gaby (an aptly cast Gabriel Arcand, a close match to brother Denys) seems to ignore the harsh reality that his business is irrevocably dying like those of his farming neighbours, and makes the tragic mistake of aiding his selfish, eldest big-city daughter. More symbol than character, Gaby is a stand-in for an entire generation of farm folk long past their prime, and Pilote appears satisfied with reducing his character to pinched dimensions that will make few think of Lear. Humourless, sincere and inevitable, everything in Le Démantèlement is right there on the surface, all the way to Gaby’s dead-end conclusion—appropriate for a filmmaker running short of interesting ideas.