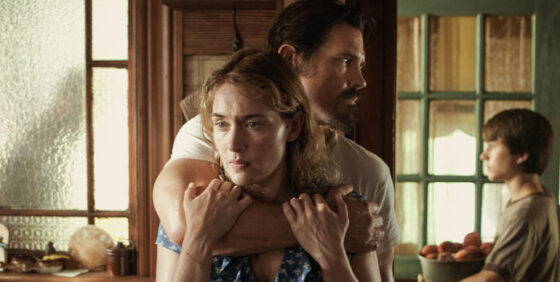 Too much sugar ruins the pie! Jason Reitman’s shamelessly saccharine adaptation of Joyce Maynard’s novel could not have resisted such a bromide, as it was baked into the dough. But the earnestness with which certain hackneyed narrative flashpoints are so handily realized turns whatever latent drama the film might have possessed into inadvertent comedy. An escaped convict (Josh Brolin) takes shelter in the suburban home of a single mother (Kate Winslet) and her impressionable 13 year-old son, both of whom gradually warm to misunderstood fugitive as he defers his escape by repairing the station wagon, cooking chili, baking pie, coaching the boy in baseball, fucking mom, and assuring the two that they are “in good hands”; the absence of a father figure for the boy, who narrates wistfully from some time in the future (when he’ll no doubt be proprietor of a pie shop, happily married, and darn good at baseball), and scarcity of romance for the mother affords the attractively bearded murderer (it was an accident, of course) plenty of room to redeem with his charmingly brusque pragmatism. There’s a surfeit of dappled light surrounding the artfully rumpled New England house to suggest a home-in-the-making among this most implausibly formed “family”; alas, plans to pack up and make a run for the border are thwarted per plot imperative. Facing the wreckage, one wishes that Winslet’s demeaning role (no matter how ably handled) was invested with enough authority to warrant the late-game Bonnie and Clyde reference, but then you’d be watching the expurgated version when the film graduates from the festival circuit to its rightful home on the in-flight entertainment system, no dry eyes required.