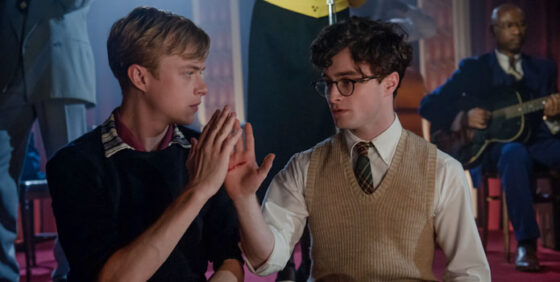 That the story is more or less true doesn’t excuse the speculative-cum-exploitative treatment it gets here; a more apt title might have been A Beat Murder Mystery. Nor does the premise’s debt to history account for the baffling music cues—from TV on the Radio to (worse) Bloc Party—used to jolt it out of the musty 1940s and into the present. For his part, Radcliffe channels Larry Gopnik at his mildest with a certain ease, but as in the Potter movies, he’s directed to blend into the background while more colourful players like Dehaan get to fatten their resumes. (Ben Foster gets partial credit for playing William S. Burroughs as Ryan Gosling’s Driver.) As with a lot of weak movies about writers, this one relies on hyper-cranked montages of coiffed artistes clacking away at typewriters and throwing pages in the air while hoofing their drugs of choice. It’s all blustery manifesto, no poetry—just like Carr, an honorary Beat without a text to his name.