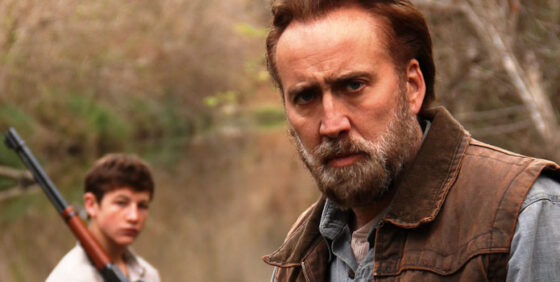 Ex-con Joe (Nicolas Cage), last name Ransom, is a right-doer with a killer dog in a fucked-up, miserable world deep down South ruled by unemployment and an economic situation for which the word “crisis” is inadequate. It’s a place inhabited by alcoholic and abusive parents, hookers, and teenagers who are trying to do better. Taking a shine to 15-year-old Gary (Tye Sheridan), who wants to break free from a sketched-out future in this dump of a town, Joe gives him a job with his own company, which is clear-cutting trees to make accessible, arable land.

If all this sounds like a clichéd and less nuanced version of Jeff Nichols’ Mud, it should. David Gordon Green is more of an old hand at this sort of stuff than Nichols: he’s been acclaimed (sometimes deservedly, sometimes less so) for Americana-heavy dramas like Undertow and Snow Angels, though he stumbled of late with poor Hollywood comedies like Your Highness and The Sitter. Prince Avalanche, which debuted in Berlin earlier this year, seemed to mark a return to the lyrically-infused indie mode that earned him his good name, and in its second half especially, Joe conjures some of the same regional atmosphere that enriches its sister film. But any good stuff is counteracted by the redundant and pointless miserablism of the whole exercise:
drifting awkwardly between several genres, from coming-of-age story to comedy to melodrama, it may be that what Green ultimately had in mind was a Southern version of a western. (A southwestern?) Cage’s acting steers away from the self-parody and boredom that has defined his recent work, but he’s no cowboy.