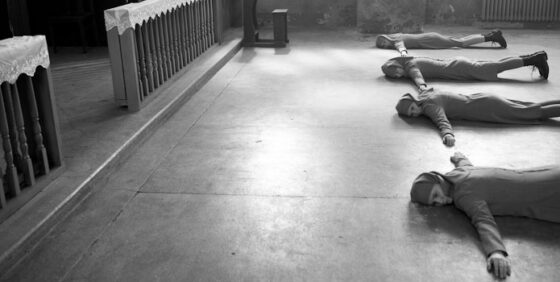 Pawel Pawlikowski’s return in letter and spirit to his native Poland is an elegiac, quasi-pious hymn (in requisite black and white) to a bygone era of Eastern European filmmaking, and by implication the legacy of Jews after occupation. Orphaned, novitiate nun Anna (Agata Trzebuchowska, a non-actor discovered in a local café) prepares to take her vows, but is ordered to make contact with her last remaining relative, a hard-drinking but self-possessed aunt named Wanda who works as a judge. Wanda’s disclosure of Anna’s true identity as a Jew (her real name is Ida), and her own past as a prosecutor of “enemies of the people” (historically, former anti-Nazi resistance fighters who were convicted in show trials under the Stalinist regime, though the film doesn’t elaborate on this as much), lead the pair on a search for the truth about Anna’s family. Pawlikowski entertains the premise for a gently ironic but still haunting journey through the monochromatic Polish countryside circa 1963, through which the two disparate women pilgrimage into the past and pause to pick up a hitchhiking jazz musician who takes a shine to the still-cloaked Anna, charming her with late night renditions of Coltrane in the smoky lobby of a hotel. Such incongruities of gravitas and levity take effect in a curious, soporific spell, in which the seemingly sacred gives way to the pathetically profane as the weight of historical revelation proves intractable. Ida is an exquisitely rendered artifact that nonetheless becomes truer for holding its diminutive shape against such weighted material, something like finding a lost Zbigniew Herbert poem scrawled on a kielbasa wrapper.