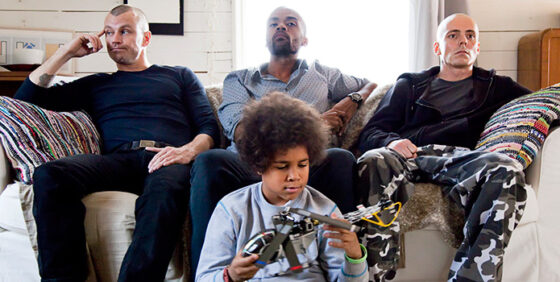 Marrying narrative contrivances with topical real-world issues is always a bad idea: the former is dead certain to spell trouble from the start, the latter usually ensures a stolid movie. Thus, Dome Karukoski’s Heart of a Lion, which performs this very shotgun marriage with unearned gusto. Screenwriter Aleksi Bardy strains to justify that unemployable neo-Nazi skinhead Teppo (Peter Franzen, who has the right bullish features) would be able to woo bartender Sari (Laura Birn), even though her son Rhamadhani (Yusufa Sibideh) is black by way of her African-born ex (Jani Toivola). Sari’s correct first instinct, once she sees Teppo’s plentiful racist/nationalist tattoos in the morning sun after a night of hot sex, is to kick him out of her house. But Bardy is determined that his characters make consistently stupid decisions, so Sari eventually gives in to Teppo’s ham-fisted “charm,” letting loose the movie’s inevitable clash between Teppo’s current lifestyle of whooping ass on people of colour with his skinhead clan and his growing affection for smart-talking Rhamadhani, victimized by school bullies. At the heart of Heart of a Lion is a liberal fantasy of conversion from deep-seated bigotry to progressive tolerance driven by the power of love. It would be nice, if one could believe in the love in the first place.