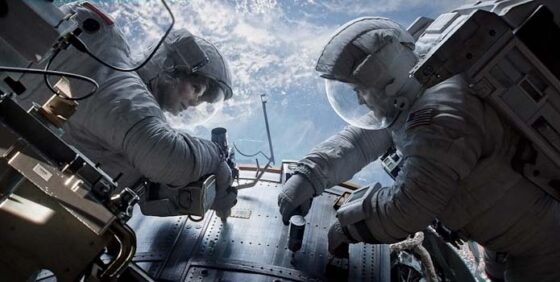 To start with the obvious, the visuals in Gravity are impeccable, which is not due simply to the presence of virtuoso cinematographer Emmanuel Luzbeki—Alfonso Cuarón understands the spatial possibilities of the frame. Characteristically using reflections to add depth to an image, he finds himself an a priori amplified playground in a film set in deep space. But whatever he achieves here visually is never really matched by a profound narrative. Anyone who thought that space would be silent is wrong: the musical score rings out loud and clear.

While working outside, or “up there” (not the last Biblical allusion here) to fix damage to their space station, all hell breaks loose for medical engineer Dr. Ryan Stone (Sandra Bullock) and astronaut Matt Kowalski (George Clooney). As parts break off the station, the pair themselves become unmoored and then drift through space together for a while, which gives Cuarón (who co-wrote the script with his son Jonás) the opportunity to play with gender stereotypes. Matt, the too-cool-for-space cowboy (call him Cloon-alski) never tires of giving witty advice to the emotionally unstable and hysterical Stone, and, damn, does she need it. It remains a mystery how she even got up there, as clueless and as clumsy she is: wherever she turns, she’ll hit something that will hit something that will hit something in turn. When she is in even more distress later, she needs a man again to tell her how to press some buttons.

At one point, Kowalski disappears due to, of course, another clumsy mistake by Stone (or did she expel him from Paradise?), which leaves her all by herself. But what we see is not really the existential spectacle of an individual thrown back on herself, but rather Bullock stripping before finding her way back to Earth through Air, Fire, and Water. When gravity finally grabs hold of her again, it latches onto the film as well, which crashes down in a hyper-climax of symbolically overloaded Darwinist allegory.