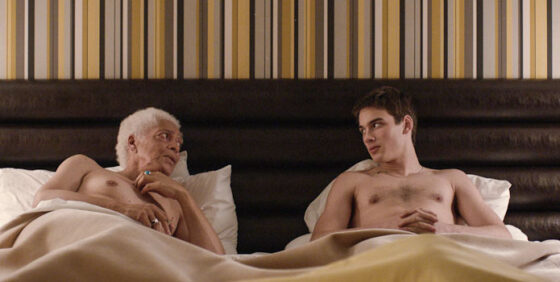 Sold as “a reverse Lolita” or “a gay Harold and Maude” in LaBruce’s failed Indiegogo campaign, the narrative is still comprised of rebels and their discontent. “You know, I’ve been thinking a lot about what you’re doing,” says the young hero’s girlfriend of his so-called affliction, “and I think it’s really revolutionary.” In the context of a film this cloying—in which diegetic slurping, smacking, and moaning played over the white text-on-black opening credits is revealed to merely be the sound of an innocent, fully-clothed make-out session under falling snow, albeit one where the girl cites her favourite revolutionary women (Patti Smith, Lizzie Borden, Winona Ryder) between each smack—the line is hilariously forthright and didactic. “But it also means,” she continues, “that we can’t be together anymore.” The tears are false, the performance is hammy, it’s all rather ridiculous, but it still hurts a little, and then you remember what makes LaBruce so special.