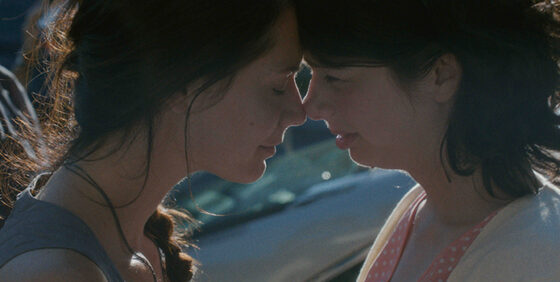 To anyone who thought it wasn’t possible for there to be a film about the mentally disabled that is as problematic as I Am Sam, has Québécois filmmaker Louise Archambault got a treat for you. In Gabrielle, actress Gabrielle Marion-Rivard stars in the title role, and suffers from the same disorder (Williams syndrome) as her character; cheerful, impish, and prone to dramatic, self-destructive mood swings, Gabrielle’s character and her fight for romantic liberation from her lover’s domineering mother is purportedly a representation of Marion-Rivard’s actual life experiences. Archambault’s task was to frame her and her narrative in an accessible naturalism that runs along a neat, extremely cloying arc, going so far as to end the film with Gabrielle and her fellow disabled choirmates on stage singing back-up for Robert Charlebois (this is literally the way the movie ends). What’s so objectionable here—besides what may be the most treacly final scene in cinema history—is that Gabrielle’s love interest Martin is portrayed by Alexandre Landry, a professional actor who has no disabilities but essentially mimics Marion-Rivard’s disorder in his role. While Archambault and Marion-Rivard may have intended the project as a kind of complex, dual method-acting experiment, the discomfort level is through the roof when Landry sings—displaying mannerisms most likely modelled after Stevie Wonder—alongside fellow cast members with Down, Williams, and other syndromes who clearly aren’t performing their tics. Not to drown out the sizeable praise this got from Locarno audiences with pedantic political correctness, but there comes a point when the tastelessness from one’s production methods overwhelms any goodwill one’s film might otherwise have earned.