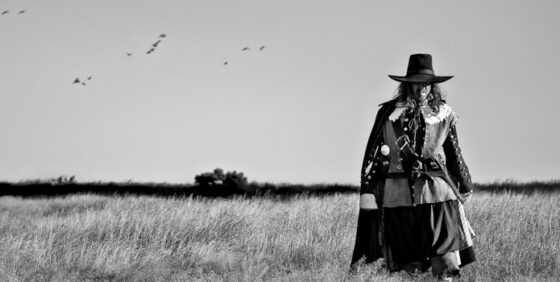 “Open up and let the devil in!” With four movies in four years, Ben Wheatley seems set on giving Michael Winterbottom a run for his money as the most prolific filmmaker in Britain, and the devil take the hindmost. Unlike the versatile and self-effacing Winterbottom, however, Wheatley immediately stamped a distinctive authorial signature on his work, even if (inevitably) that signature has mostly been defined with reference to others—“Mike Leigh meets Quentin Tarantino” was the critical catchphrase used to pinpoint his 2009 debut feature Down Terrace, a working-class family comedy with a body count to rival The Godfather. That thumbnail could also be applied to Wheatley’s third film, last year’s Sightseers, a caravan comedy that careened from Nuts in May-style caricature to giddily gruesome black comedy without blinking an eye. In between, Kill List didn’t break the pattern but did push the violence to more extreme ends, evoking Satanic cults (a tabloid spectre in contemporary reporting of the Jimmy Saville child abuse story) and sounding echoes of Robin Hardy’s cult horror film The Wicker Man.

If there was a hint of Carry On Camping about Sightseers, a sense that Wheatley was playing to the gallery, it’s worth noting that it’s the only one of the films to date that wasn’t scripted by his partner Amy Jump. At any rate, A Field in England is something else again, more akin to Kill List but wilder and weirder and a period film to boot. Largely neglected by filmmakers, the English Civil War pitched Royalists (in support of Charles I) against Parliamentarians (or “Roundheads”) led by Oliver Cromwell. Easily the best movie on this period is Michael Reeves’ 1968 Witchfinder General, and Wheatley’s film surely draws its inspiration from Vincent Price’s sadistic opportunist Matthew Hopkins, notwithstanding that in Wheatley and Jump’s conception there really does seem to be sorcery afoot—or can the film’s infernal manoeuvres through time and space simply be attributed to the magic mushrooms consumed by its ragtag crew of battle-weary deserters? (Here’s another quick association for you: Monte Hellman’s equally impoverished and abstracted B westerns, Ride the Whirlwind and The Shooting.)

If Reeves suggested a cruel, Langian vision of rampant, self-perpetuating cycles of persecution and revenge, Wheatley conjures something more mysterious and, indeed, mystifying: an existential comedy that’s part Samuel Beckett, part Black Adder, a bizarrely aimless or at least roundabout quest tale of hapless foot soldiers, infantrymen beaten down by a lifetime of servitude and cynicism. These incorrigibly submissive rebels escape one bloodbath only to be tricked and bullied into serving an even more nefarious master (Kill List’s Michael Smiley as O’Neill, himself a runaway servant who has made off with his lord’s papers on alchemy and science, and apparently studied some of the Satanic arts). Seeking refuge from carnage on the other side of the hedgerow (we never see more than inkling of the war, just smoke and cannon-thunder), the self-professed coward, scrivener and astronomer Whitehead (Reece Shearsmith) allows a corpse to point his path, a course which happens to take him away from the fighting and which coincides with the route preferred by his new companions, a trio of soldiers inclining towards the nearest ale house. There’s Friend (Richard Glover), an imbecile with an amiable disposition who blanks when Whitehead references the stars (“Have you never looked up?”); Jacob (Peter Ferdinando) is a more cantankerous sort, but for all his bluster essentially harmless; Cutler (Ryan Pope), on the other hand, has a touch more authority about him, and it’s Cutler who leads the others (by way of a magic rope) to the clutches of O’Neill, who was Whitehead’s quarry all along (and vice versa).

The title is presumably an ironic echo of Rupert Brooke’s WWI poem “The Soldier” (“there’s some corner of a foreign field / That is forever England”), and given its recurring series of resurrections and circular ending A Field in England can be seen as a dying man’s fever dream, or even a sojourn into the afterlife, a vision of hell in which O’Neill must be Lucifer. Unusual for featuring no interiors at all (it’s set in entirely in the English countryside), this is no pastoral idyll or heritage travelogue. Shot in black and white (Wheatley has referenced Peter Watkins’ Culloden) and filmed over 12 days (only four more than Down Terrace!), the movie’s rough-hewn, handheld technique is de-naturalized by the electronic score and loose, floating sound design, the dizzy and disorienting editing, and occasional bursts of full-blown surrealism: a rope that pulls all the men up a hill as if they’re on a conveyer belt, for example, or the von Trier-esque tableaux that occasionally interpolate the action, as if the characters are suddenly modelling for some unseen Breughel.

While Jump sets up fairly clearcut oppositions between the men of reason (the scholar Whitehead, who remains clueless about the way of the world), pagans and peasants, wherever possible Wheatley means to confuse and confound, to pull the rug out from under us, and himself too. It’s a welcome, unruly impulse in a filmmaker so early in his career, a defiant signal that Mr. Wheatley is not going to be pigeonholed as easily as all that.