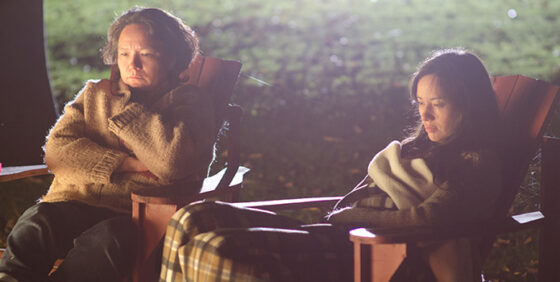 Since her breakthrough in Bruce McDonald’s Dance Me Outside, Jennifer Podemski has had a grounding effect on the countless Canadian TV shows and films she’s cropped up in, singlehandedly recalibrating the sombre melodrama of Degrassi into something like realism. Podemski is an especially valuable player in Peter Stebbings’ Empire of Dirt, a too-neatly structured look at a couple of First Nations mother-daughter pairs coping with traumas both fresh and ancestral, whose descent into Canadian storytelling clichés is so pronounced that it needs all the integrity it can muster from its cast.

That trajectory is especially disappointing because the setup, which introduces Lena (Cara Gee), a recovering addict and former model, and her misbehaving tween daughter Peeka (Shay Eyre), is pretty good. It’s not exactly Allan King, but there’s a nervy, quasi-vérité energy to the early glimpses of Lena running a workshop for teens at a Native crisis centre in Toronto. We also get a surprisingly non-judgmental depiction of Peeka’s first experimental drug use, a moment that’s written like a PSA but more smartly played as a tender first date. It’s the fallout from that event that takes the film to a more conventional place, quite literally, as mother and child head back to—where else—the former’s rural childhood home for a refresher with estranged grandmother Minnie (Podemski). Podemski is wonderful at conveying a lifetime of hurt on her placid face, but one wishes Stebbings didn’t cram her into a tired reconciliation narrative, complete with nostalgic and ultimately conservative monologues about the old ways that utterly erase our goodwill from before, when the city came across as a complicated place to raise a First Nations teen rather than a new Sodom/Gomorrah.