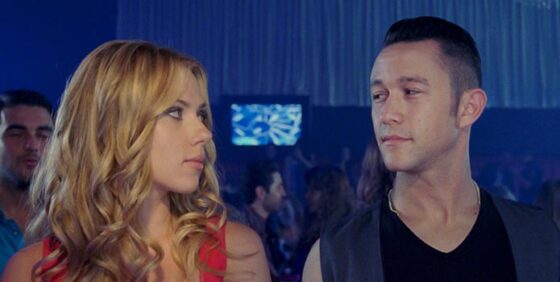 An overeager new entry in the cinema of reformed douchebags, Don Jon is the feature debut you would expect from Joseph Gordon-Levitt, an affable star who’s keen to show his directorial (and pectoral) chops at all costs. And show them he does, in a host of obnoxious if admittedly muscular montages that introduce us to the daily routines of the titular lunk (Gordon-Levitt himself), a New Jersey club fixture in search of sexual nirvana, whether through internet porn or through intercourse with a woman he considers a perfect ten, otherwise known as a “dime.” Enter grand dime Scarlett Johansson, a Real Woman (™) who withholds sex until she meets the parents, including clear MVP Tony Danza as Don Jon Sr.

The monetary metaphor is supposed to put us on guard, alerting us to the finite nature of Jon’s shallow search for the big bang, but the film has its own specious ranking system where women are concerned. Johansson’s gum-smacking, Jersey-accented princess is but a step in Jon’s Platonic ladder of love, leading all the way up to seasoned widower Julianne Moore, who has a flair for pot and tantric sex. Her shallow lesson that it takes two to truly lose oneself in sex feels awfully familiar, but that’s no surprise: everything here is on loan, from the tortured Catholicism of Mean Streets to the handsome man’s tragedy of Shame. Gordon-Levitt’s more modest aims help the last act’s moralizing go down smoother than Steve McQueen’s tongue-clucking opus, but only just.