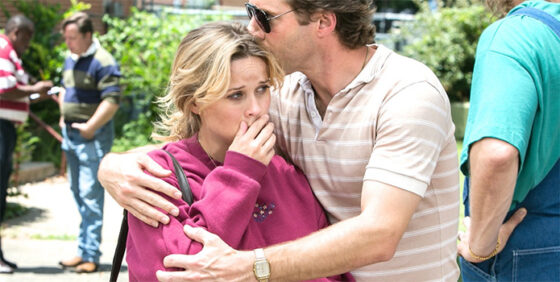 The story of the wrongful conviction and incarceration of Damien Echols, Jessie Misskelley, Jr. and Jason Baldwin—better known as the West Memphis Three—was conveyed in such compelling, gritty detail over the course of the three-part HBO documentary Paradise Lost (1996/2000/2011) that one may conceivably feel sorry for anyone attempting to relate it again as drama. In the case of Atom Egoyan’s Devil’s Knot, however, it’s hard to drum up much pity. Based on Mara Leveritt’s non-fiction book of the same name, Egoyan’s film never finds its focus, drifting aimlessly between stale courtroom procedural, hallucinatory dream sequences, and overwrought melodrama. Searching for an entry point into a well-known story, Egoyan bounces between the mother of one of the murdered children, Pam Hobbs (Reese Witherspoon, post-Mud the go-to sloppy Southern belle) and crusading private investigator Ron Lax (Colin Firth, with a scruffy beard and ambiguous Southern-gentleman accent).

While the HBO documentaries were filled with characters whose richness seemed almost too good to be true, here the likes of the crazed John Mark Byers (Kevin Durand) merely become loosely drawn regional stereotypes (there are a lot of moustaches and mullets in this movie). As such, our time is mostly spent with Witherspoon weeping and Firth fumbling about in what must be the most sterile, antiseptic representation of the Deep South to ever grace the screen, the multiple tracking shots through scenic bogs notwithstanding. While the Paradise Lost films exposed the ugly underbelly of rural Arkansas—and in doing so demonstrated how quickly close-knit communities can breed lynch mobs—Devil’s Knot feels strangely clean. This, at least, meshes with the film’s made-for-TV quality and style, although at this punishing duration, such tidiness hardly seems worth celebrating. Culminating in a tearful speech by Pam about how she just doesn’t know who is guilty anymore, the answer seems painfully evident: it’s the guy behind the camera.