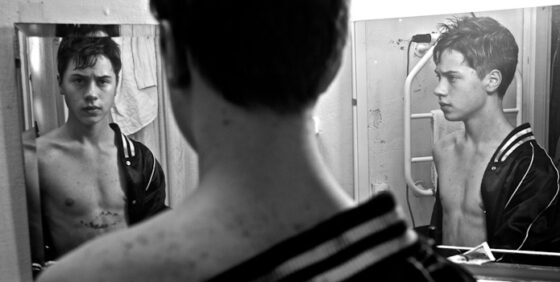 If Pirjo Honkasalo was on the radar of North American cinephiles recently, it was probably with The Three Rooms of Melancholia, her acclaimed 2004 documentary about the Chechen War. Concrete Night is her first fiction feature since Fire-Eater in 1998, and although there’s no question that Honkasalo exhibits a master’s control of the medium, she also seems a little rusty. This is a film that fits quite snugly into a particular mode of poetic miserablism: shades of Fred Kelemen and Sharunas Bartas haunt the stark black-and-white cinematography and urban decay (provided, in this instance, by an industrial slum of Helsinki too bleak even for Kaurismäki to countenance). Honkasalo begins the film with a lovely nightmare sequence that capitalizes on her film’s dominant formal strangeness: a high-key, hyper-real surface to the squalour that manages to merge heavy industry and glistening surrealism into a kind of psychological non-space. We know that the oil tanks, bridges, cranes and crumbling factories are real, but Honkasalo’s digital cinematography reduces them to chimeras signifying picturesque decay. Eventually, this aspect of Concrete Night starts working to its own detriment, as Honkasalo clamps down into a three-act structure, based on the relationship between a young man and his soon-to-be-incarcerated older brother. When we are expected to dwell in the “real world,” it’s hard not to feel as though Concrete Night has been art-directed right into a ditch. This is the sort of film that you watch with a double consciousness, constantly distracted by the battle between visionary impulse and rank cliché.