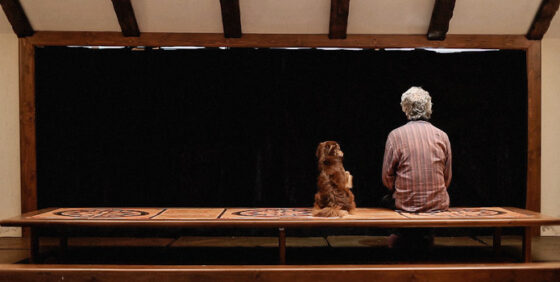 [SPOILERS follow.] This Is Not a Film was a hybrid documentary wherein Jafar Panahi showed us what happens when a restless creative mind tries and fails to negotiate various end-runs around the absurd, maddening restrictions imposed upon him. In many respects, the more Panahi “failed”—famously walking off camera in tears, refusing to discuss his script any further because “If you could tell a film, why make a film?”—the more he succeeded, showing the regime of Ayatollah Ali Khamenei to be one not just of tyranny but of stifling pettiness.

Given that Panahi’s objective situation has not changed—and whether the election of a moderate president will make any difference in the lives of Iranians of any stripe, we shall see—it comes as no surprise that Closed Curtain, his second film completed under house arrest, has much in common with the first. Both films are about anxiety and confinement, but the similarities are deceiving. Closed Curtain is like a prismatic refraction of This Is Not a Film, the truth of Panahi’s loss of freedom broken down into shards that sometimes overlap, frequently contradict one another, and ultimately refuse to cohere into a fully legible allegory.

The first half of Closed Curtain appears to be a straight fictional work, and a very well-shot and -acted one at that, remarkable under the circumstances for being on par with Panahi’s “free” works. Co-director Kambozia Partovi (best known in the West for the film Café Transit) plays a fugitive hiding out in a three-storey villa, blacking out the windows; he is on the run because he fought police officers trying to confiscate his dog, Boy. (In this dystopia, the Islamic Republic considers canines unclean.) Later, two other fugitives seek refuge in the house: a young man and his troubled, suicidal sister (Maryam Moghadam), who the former leaves behind while he goes out to seek help. At the halfway point, however, Panahi himself enters the house, and these two figures—the despairing woman and the working man—become purely symbolic presences, two polar tendencies within Panahi himself.

Closed Curtain finds ways to complicate this scenario, which has every chance of becoming leaden and overly literal. We never see the two figures argue over Panahi’s fate, or manoeuvre to influence his decisions. Instead, they are watchers whose previously established characters merely deepen our understanding of Panahi when he appears, puttering around or interacting with colleagues or neighbours. Even simple elements like the curtains or the broken window (which is a membrane between Panahi’s reality and that of the imaginary characters) are treated so matter-of-factly that they resist any burdensome symbolic freight. Rather, they display Panahi’s state of disconnection, his suspension between worlds while belonging to none. Where This Is Not a Film was a political work through and through, Closed Curtain enfolds its politics within what I believe will go down as one of cinema’s finest, most complex acts of self-portraiture.