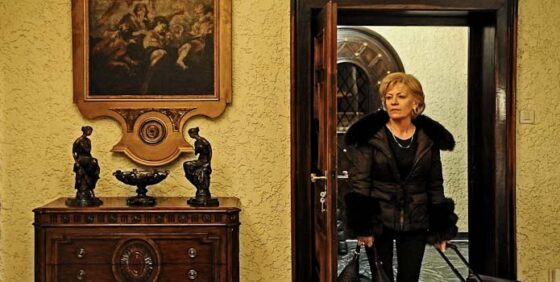 The not-so-New Romanian Cinema is still rocking and rolling, more than a decade after commanding the attention of major Western film festivals. This year the festival features strong entries by Corneliu Porumboiu and Cristi Puiu alongside this perfectly average national-spotlight programmer that, rather remarkably, nabbed the Golden Bear at the Berlinale this past February. Child’s Pose is the sort of film that foregrounds a major event rather than a plot per se, in the hope that the exploration of said event will allow character nuance and social significance to waft up from cracks in the façade. Another way to put this is, Netzer would like to be making A Separation (another recent Bear awardee), but he doesn’t possess Asghar Farhadi’s dramatic or formal skills.

Cornelia (the great Luminita Gheorghiu), a wealthy architect with political connections, has a spoiled-prick son (Bogdan Dumatrache) who despises her, so much so that when he runs a poor kid down on the highway with his BMW she has to beg him to let her “fix” the situation. What should be a study of post-communist generational conflict, the blithe application of privilege sucking the soul of the young people who actually toppled Ceausescu, is instead a dank, shaky-cam chamber piece filled with personal recriminations that echo no further than the immediate family—that is, until the final fifteen or so minutes, when Cornelia debases herself at the dead child’s wake. Only then does Netzer actually hit upon something substantial, allowing us to watch the distraught woman function as an unwitting synecdoche for a ruling class fighting for its life. It’s too little too late, but still, it’s power can’t be denied.