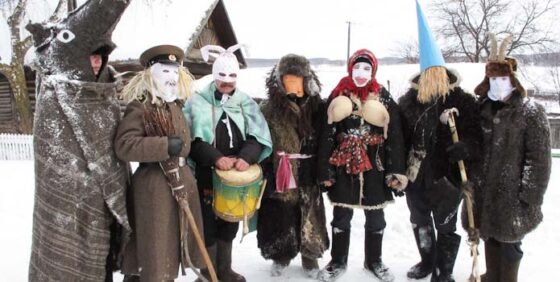 The Mari culture is a western Russian ethnic group positioned along the Volga who, after having nearly been wiped out by enforced Sovietization, is experiencing resurgence due to concerted preservation efforts on the part of contemporary ethnic Maris. The cinema of Alexey Fedorchenko is a key part of this; at the moment, his films may represent the Maris’ biggest cultural presence on the world stage, and a struggling ethnic minority could do a heck of a lot worse. Fedorchenko’s previous film, the achingly beautiful Silent Souls, was a portrait of death and mourning that cast Mari pagan ritual in the context of contemporary society, showing the difficulty of keeping folkways alive. (In a particularly moving sequence, two men, lovers of the deceased, stop to eat fast food on the way back from committing her body to the sea.)

Fedorchenko’s follow-up is a 180-degree turn, almost every bit as celebratory as the prior film was elegiac. Celestial Wives is a collection of 23 vignettes, each centred on a different young peasant woman with a name beginning with O. Not every one of the segments relates directly to sex, but the female body (and the female bawdy) is the dominant motif throughout the film. The structure, style and subject matter produce a curious and disjunctive sensibility—an earthy, voluptuous tone reminiscent of Dvortsevoy’s Tulpan, poured through the funnel of Greenaway’s The Falls. The problem, ultimately, is that Celestial Wives is wildly uneven. Fedorchenko’s aim is to display a panoply of pagan beliefs, alive and thrumming in the now. We see tree spirits planting birds in vaginas, ghosts conjured by sex dances, the permeable wall between the living and the dead, and even an occasional dip into the plangency of Silent Souls. However, just when something compels our attention, it evaporates, and there is a fair amount of baggy material in the middle. But if we consider Celestial Wives to be a kind of living showcase, Fedorchenko’s contribution to the excavation and revivification of Mari culture and religion (perhaps a cinematic museum exhibit called “Weird Sex on the Volga”), then the film’s faults are completely forgivable.