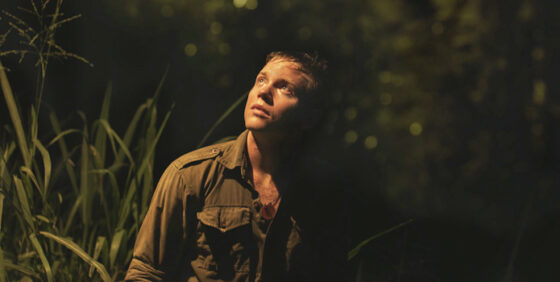 Set in early 1942, Australian writer-director Aaron Wilson’s feature debut unfolds entirely in the fecund jungles of Singapore in the midst of the Japanese invasion. Canopy follows a downed Australian airman and a lost Singapore-Chinese resistance fighter as they join forces to tend to their wounds and find their way to safety. There is very little in the way of talk—the men share no common idiom, and in any event are focused solely on survival. Which frees Wilson up to eschew what could have been very tedious exposition and devote himself to cultivating an immersive environmental experience, something a little closer in spirit to Tropical Malady than, say, Hell in the Pacific (though the almost zoological attention to nature’s indifference to human conflict most readily recalls The Thin Red Line). Insects, bombers, wildlife and snatches of radio broadcasts populate the aural airspace; faces and bodies glisten with sweat, a scattering of white flowers appears luminously in the dusk, silent Chinese soldiers creep over a rise. Wilson’s camera glides above the canopy, prowls between trees or hovers just over the muck—its point of view is that of place, not character. The opposite of overreaching, the approach is refreshingly single-minded and a showcase for the director’s craft, most often captivating if inherently limited in scope. Very promising overall, but let’s see what happens when Wilson’s characters have to speak.