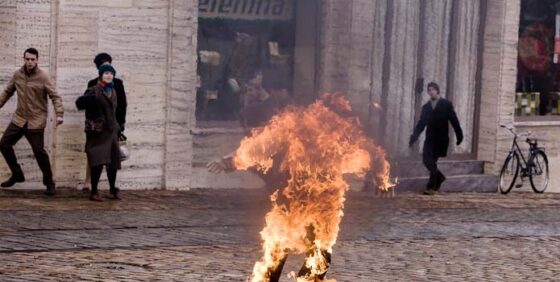 There’s likely to be some bitching about the increasingly popular phenomenon of television getting screened at film festivals in the Southcliffe review, so I’ll try to be brief in that regard. But it must be stated that Burning Bush, which currently doesn’t even have director Agnieszka Holland’s name listed in the main details of its IMDb page (even though It’s Not TV, It’s HBO Europe), suffers immensely from having all three of its parts viewed back-to-back-to-back in one sitting. Part of this is a product of the mental and physical fatigue intrinsic to any four-plus-hour-long screening, magnified exponentially by the fact that you’re watching it in the middle of a movie mega-binge. More egregious, though, is that it betrays series editor Pavel Hrdlicka and writer Stepan Hulik’s narratological sensibilities, abandoning their triadic structural arc–conceived under the impression that viewers would have a week-long break between each part–so it can be packed together and served up as a single turgid period epic.

As screened at TIFF, Burning Bush—which examines the fallout from the January 1969 self-immolation of Jan Palach, the Prague student who set himself ablaze to protest the Soviet occupation of Czechoslovakia—is inert and has no sense of flow, and this despite the wavy dramatic effect caused by the three-part scrunching. This isn’t entirely the fault of the festival organizers: Holland is a problem here too, as this is one innocuously directed motion picture. There isn’t a composition or camera movement we’ve never seen before, and the period placements (everything desaturated, of course, because it’s Eastern Europe and this is “history”) are so specifically late-’60s that there’s no room for characters’ own histories to sneak in, never mind their personalities. Holland’s preoccupation with presenting a de facto chronicle of the case ostensibly means that the milieu of Prague–not a boring city–was non-existent, and therefore boring. Not even week-long breaks could alleviate those deficiencies.