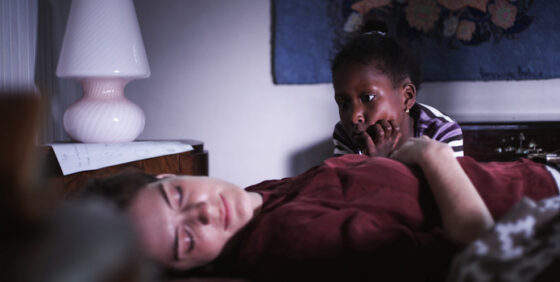 This second film by Oliveira poses a few key questions. First, are European films schools necessarily doing the right thing by basing their training on the auteur theory? Bobô is beautifully shot and paced; the early shots of Sofia (Paula Garcia) in her meticulous, lifeless apartment are notably impressive for how well they convey the isolation of a depressed intellectual, her bookshelves forming walls within walls and frames within frames. Much of the rest of the film exhibits similar formal control. But as a writer, Oliveira has very little to say to us. Her artistry could best flourish in realizing the scripts of others, but this tends not to be how one shinnies up the echelons of European funding.

In terms of plot, Bobô raises another significant issue: Why are films like this still being made? To wit: Sofia has experienced a trauma that is only revealed in the third act. To try to shake her out of her funk, her mother sends her Mariama (Aissatu Indjai), a Guinean housekeeper. They become friends, sort of. And a young Guinean girl, Bobô (Luana Quadé), enters the picture, coming along with Mariama on certain days. We eventually learn that Mariama is trying to protect Bobô from her grandmother, who wants to “circumcise” the young girl. But by the end of the film, we realize that we’ve learned next to nothing about Mariama, Bobô, her grandmother, or the Guinean community. Their function in the film is solely to shake Sofia out of her grief, and to raise her out of her blinkered bourgeois-European worldview.

In one particularly egregious scene, Mariama takes Sofia to a Guinean celebration where she marvels at the costumes and dancing, then loosens up and joins in. What would a similar scene look like with the races reversed, a West African woman gaping in awe at some white people at a wedding doing the Chicken Dance? It would be merely ridiculous. But if she later tried to intervene in a circumcision, it would be offensive, no? What Sofia does is not wrong, because she is working with Mariama on Bobô’s behalf. But it takes a complex, transnational feminist approach to filmmaking to give these women’s partnership across cultures any real meaning. Who they are, with their differential positions in society, should at least be somewhat fleshed out. But as it is, Oliveira reduces Mariama and Bobô to good deeds and therapeutic catharses on Sofia’s part. As such, the film reverts to colonialist reflexes, no matter its intent.