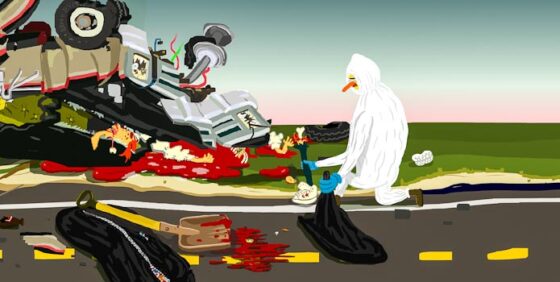 Full credit goes to Shayne Ehman and Seth Scriver for making a national portrait that thoroughly rejects the heartwarming dictums of CBC radio producers, government tourist officials, and any other purveyor of folksy Canadiana. An ultra-lo-fi animated travelogue based on a cross-Canada hitchhiking trip that the pair took in 2000, Asphalt Watches bravely shows this country in all its surly ugliness. It’s hard to think of another movie that so keenly captures the desperate anti-glamour of a beauty contest in a Regina shopping mall, the grease-spackled grubbiness of a diner road stop on the Trans-Canada Highway, the day-glo neon hells of various charmless bars, or the garbage-strewn hopelessness of the half-dead towns that litter the landscape. And let’s not even talk about the disgusting losers and sick fucks who actually live here.

Quite why anyone would want to bother crossing the place is one of many things that Asphalt Watches doesn’t bother to explain. Nor do the film’s two young travellers—a transparent snowman/ghost thingy named Bucktooth Cloud and his more-or-less human-shaped partner Skeleton Hat—tend to talk much about where they’re going or why they’re doing it. Instead, they’re mostly concerned with maintaining some kind of forward momentum, with a tattered copy of Train Hoppin’ Manual 1998 serving as their only guide.

“Fuck off” is the beginning and/or ending to most of the conversations the duo have with the people who give them rides, though some qualify as almost friendly, like the chatty trucker who won’t shut up about the vagaries of CB-speak or the friend in Regina who shows them local sites of interest. However, it seems like a better idea to avoid the bearded guy who rants about his “intensive Santa training,” and the dudes in the pickup truck who get surly when they run out of beer and smokes.

However primitive their animation style initially seems, Ehman and Scriver’s brand of grotesquerie is surprisingly rich in detail and colour. A used teabag on a dashboard, a raggedy duffle bag with a Boston Pizza logo, a billboard scrawled with the message “Wiggle it just a little bit”—all supply a pretty much continual supply of visual stimulation, which is a good thing since the narrative could be politely described as episodic, and less charitably as non-existent. The stoned-out-of-gourds vibe is heightened by the creators’ penchant for luded-out hip-hop rhymes about hot dogs and the benefits of direct deposit.

All this is likely to net Asphalt Watches plenty of comparisons to early South Park and the most non-eventful examples of the Adult Swim output, but the best of it is more of a piece with the art and deeply hostile sensibility of Savage Pencil and Raymond Pettibon. Of course, it all goes on way, way too long, but no story that involves a cross-Canada trek could ever feel authentic without stretches of ass-numbing tedium. If Ehman and Scriver were wise, they’d ensure every audience member gets a complimentary double-double from Timmies before they turn on the projector.