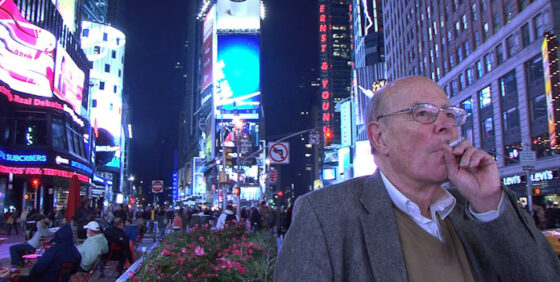 Long ago in a cinema world far away, Marcel Ophüls made a movie titled The Sorrow and the Pity, an angry jeremiad against French collusion with the Nazis, and it left scars. Ophüls, Max’s son, had none of his father’s gifts for the combined grace and magnificence of mise en scène wrapped in human emotion, but he knew how to provoke. And so life went on, and Marcel went to lunch on The Sorrow and the Pity for years. Unfortunately, he still thinks he can make movies, which this unmitigated disaster of a self-portrait proves is one fat delusion. A sloppily edited chain of tidbits, sound bites, personal attacks (he pretty much calls Antonioni a fascist bitch, which is his immature way of standing up for pal Jeanne Moreau, who didn’t get along with the maestro) and even more personal obsessions (like for Moreau, who gets caught up in an exchange with Marcel that has all the social elegance of a man running down the street in ratty underwear). There may be a worse film at this year’s TIFF, where there is always a worse film just around the corner, but I’ll bet you right here and now that you won’t find it. The only question is why world-class festivals like Cannes (where this thing first appeared) and Toronto are enablers of someone who shouldn’t be let near a camera and a mic.