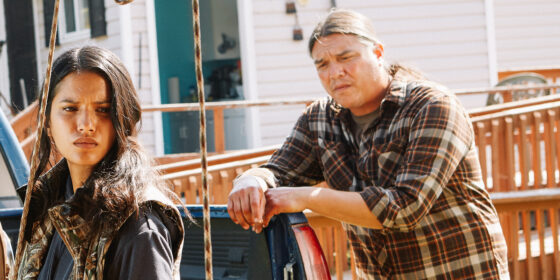 You almost have to admire the chutzpah of Through Black Spruce, which hits TIFF with an inscrutable mix of sheepishness and self-confidence. Don McKellar’s adaptation of Joseph Boyden’s Giller Prize-winning novel couldn’t be arriving at a worse time, a cultural moment where writers like Jen Sookfong Lee and Alicia Elliott have proclaimed the institution of CanLit that spawned the source text a “dumpster fire.” In part, that’s thanks to Boyden’s role in drafting a letter seeking “due process” for UBC Creative Writing professor Steven Galloway, ousted over an investigation of sexual misconduct, whose support by luminaries like Margaret Atwood has been read by many as the old guard’s effort to close ranks against vulnerable students and emerging writers. That’s not to mention Robert Jago’s investigation, for APTN, into Boyden’s ever-shifting explanations of his Indigenous identity, to which he has answered in ever-shifting ways. That the novel has been adapted at all by McKellar—an affable screen presence and efficient director but a conspicuously white settler messenger for this story—is par for the course, given how many of the year’s literary controversies, Boyden’s especially, have swirled around white creators’ indifferent to hostile appropriation of Indigenous stories.

All of this is to say that Through Black Spruce is a minefield that isn’t worth crossing, a sub-Nic Pizzolatto literary potboiler with too much baggage. The film is, at best, a competent but overly reverential adaptation of a middling dead-girl-noir that, like the novel it’s based on, couches its pulpy undertones within a self-congratulatory critique of how everyone from white feminist gallerists and fashion-industry influencers to handsome young Indigenous photographers without roots—the closest we come to an avatar for a hack novelist estranged from the people he claims as kin—exploits Indigenous women who have, as one talent scout portentously claims, “exactly the look people want right now.” That palpable sense that McKellar has hitched his wagon to a sketchy guide is too bad, given the adroit performance from lead Tanaya Beatty, who plays a young Cree transplant from Moosonee who becomes a big-city doppelgänger for her missing twin sister the more she searches for her in Toronto, and Mohawk actor Brandon Oakes as the girls’ down-on-his-luck uncle Will, who finds grace notes in some kitschy material about alcoholism and second chances.

Both fare better than the director, who appears as a smug arts reporter from NOW magazine. McKellar’s onscreen interlocutor lands somewhere between his funny cameo as a big-shot Toronto director in the Degrassi reboot’s pilot and a woke black mirror image of cultural appropriation super-fan Jonathan Kay, a guy who claims to worry about putting words in the mouths of his Indigenous subjects but also wants to make sure he has enough material to file before his deadline. It’s as self-effacing as directorial cameos get, but it’s also a bit sad: if McKellar knows that both his material and his subject position are dodgy, why bother?