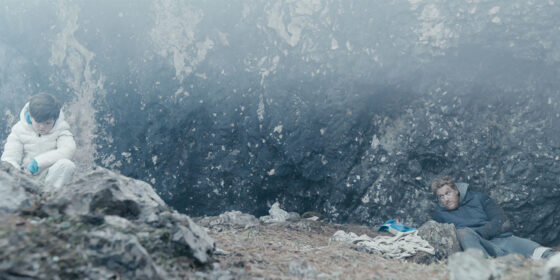 Three Peaks opens with a man and a child struggling to hold a conversation underwater in a fancy resort swimming pool; it’s a witty visual pun pointing to submerged motivations and difficult intergenerational communication. Jan Zabeil’s film is filled with such touches, and as they add up, you could be forgiven for thinking you’re watching something a cut above the usual European co-pro festival fare (i.e., a good percentage of the selections at this supposedly slimmed-down TIFF). Alexander Fehling (who also starred in Zabeil’s previous, lugubrious Heart of Darkness riff The River Was a Man) is Aaron, the eager would-be stepfather to eight-year-old Tristan (Arian Montgomery), whose dad is out of the picture but in constant contact via cell phone (the constant chirping of the handset is another good little touch). Having arranged a rustic alpine holiday for the boy and his mother Lea (Bérénice Bejo), our ropey, bearded hero is made to feel first like a usurper and then an outright impostor.

The mountainside setting and title are self-consciously mythic: this is very much an Oedipal drama (emotionally if not biologically), with Tristan slyly and then obsessively inserting himself in between his grown-up chaperones. It’s also, probably coincidentally but no less interestingly, an almost perfect inversion of Force Majeure, similarly swathed in snow and fog, but swapping out Ruben Östlund’s anxious, wormy, self-preserving pater for a strong, sensitive, capable man nevertheless weakened by his lack of true filial attachment. Zabeil doesn’t have (or try for) Östlund’s humor, but his squareness isn’t as much of a liability as his ultimate, calculated evasiveness. The ambiguity of the final passages doesn’t feel arrived at or earned (as it does in the best work of the Dardennes, whose Le fils is duly evoked), but imposed—just another touch.