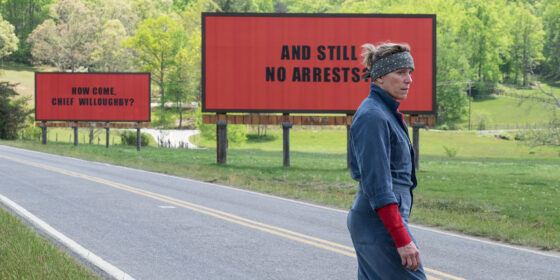 Martin McDonagh’s rollicking and viciously funny revenge tale stars a memorable Frances McDormand as Mildred Hayes, a mother who seeks retribution for her daughter, who was brutally raped and killed by men the local police forces seem uninterested in bringing to justice. Seven months after the crime and without a lead in sight, Mildred rents the eponymous three billboards and has them display an all-caps j’accuse: RAPED WHILE DYING; AND STILL NO ARREST; HOW COME CHIEF WILLOUGHBY? You’d think Mildred’s outrage would be something the whole community would stand up for, but her quest for truth is a battle she must wage alone. Uncomfortable with her attack against local authorities (and perhaps complicit with her daughter’s death as well), the denizens of Ebbing slowly begin to ostracize her, while the police do everything they can to sabotage her efforts.

McDonagh’s script treats its dark subject with just the right amount of irony, without ever turning Mildred’s horrific loss into some sort of parody. Tough, John Wayne-looking, denim-wearing and chain-smoking Mildred is a wonderfully multifaceted character, and McDormand adds a subtle layer of fragility any time her heartless public persona leaves room for her more private, grieving and fragile self. But while McDormand is the main attraction, her co-stars are excellent as well: Woody Harrelson nails it as foul-mouthed police chief Willoughby, who turns from Mildred’s archenemy into her unexpected ally, and Sam Rockwell is in a league of his own as Harrelson’s not-so-silly-and-mean-as-he-may-seem sidekick Dixon, nailing one wild scene after another as he undergoes an unforgettably funny (and touching) bad-to-good-cop transition.