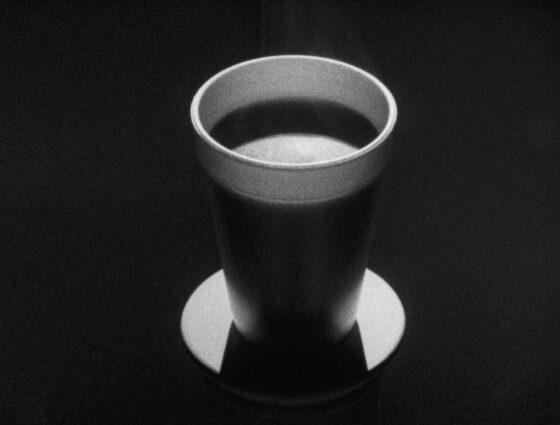 “The way I see it, movies move,” James N. Kienitz Wilkins declares in his monologue film This Action Lies (2018), made for Centre d’Art Contemporain Genève’s Biennale de l’Image en Mouvement. A styrofoam cup of coffee is viewed several times, with fluctuations in gradient distinguishing one Warholian long take from the next. The voiceover claims to be delivering an apology, but instead uses the concept of the apology as a point of departure for a rambling investigation that again revisits the question of the medium’s ontology, though now with a mind to material considerations: Wilkins equates life with movement and proclaims cinema the art of movement, but he also, after wringing his hands over the fate of a DCP-containing thumb drive in Common Carrier, now worries about the physical manifestation of his own work. What does it mean for a film to exist and yet never assume the form of a celluloid strip? Not eager to find out, Wilkins speculates as to how to get a hold of a curator in the film department at the Museum of Modern Art, step-by-step tracing the route by which one might figure out how to get a hold of an employee of a prominent cultural institution, hoping that they’ll elect to strike a print of one of his films.

But just as salient as his anxiety about his own career is his anxiety about having newly become a father: suddenly, all of his frustrations about being an artist are refracted through the prism of familial obligation, now having to make a living for himself and for others. It helps to retain his ties to the everyday, though—Dunkin’ Donuts is again dissected at length, linked to the charmingly proletarian incompleteness of construction sites, regionalism (through its cultish popularity in its founding New England), and the physical movement of dunking one object into another. At this relatively late stage of the game—nearly seven years after the completion and premiere of Public Hearing—Wilkins characterizes his own approach in This Action Lies as “searching for a method,” echoing the title of an essay by Jean-Paul Sartre that served as the introduction of his second systematic masterwork, the Critique of Dialectical Reason. But more primarily, This Action Lies evokes Sartre’s fellow countryman, Marcel Duchamp. The urinal is again replaced, this time by a styrofoam cup; the “R. Mutt” signature replaced by a voiceover narration that digs into the perils and anxieties of a working filmmaker living in a capitalist society who has just had a kid. The documentary quality of Wilkins’ work is one of its subtlest and most crucial, and the affecting fullness with which he captures the quotidian psychology of our age in his monologue seems to substantiate his belief in cinema’s capacity to document one’s historical circumstances, despite its easily misguided, capitalist nature.