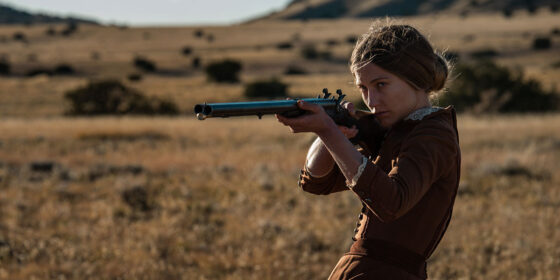 Not unlike its South-shall-rise-again predecessor from 90 years ago, Emma Tammi’s The Wind pits woman against landscape, and when confronted with what little remains of Western civilization, things begin to unravel. Tough to the point of being worn down, Elizabeth Macklin (Caitlin Gerard) first appears in the doorway of her home, covered in blood. She and her husband are settlers in the 1800s, and the arrival of a new couple, occupying the only other home for miles around, disrupts their way of life. When their new neighbour Emma (Julia Goldani Telles) becomes pregnant, old threats return and both woman begin to be assaulted by an unknown force from the darkness, a demon of the prairies. But as the non-linear story unfolds, the threat becomes more and more insidious.

As Elizabeth prepares for battle, it is clear that the most interesting part of The Wind comes from its use of space. The demon, in its many forms, is always able to find Elizabeth on this open plain. She can neither hide nor protect herself from what is threatening her without revealing herself. She runs from house to house, but these are the only landmarks for miles; she lights candles to see what’s outside, revealing to whatever is nearby exactly where she is. In the isolation of the prairie, it is the presence of others that is most terrifying—the lights on at the house that should be empty, the knock on the door when no one should be there. There is no safety in others, and Elizabeth can only protect herself through isolation, the wide-open plain become more and more claustrophobic.

The shortcomings of The Wind, however, are so typical of the genre that one wonders why such films are still being made. The source of the horror of Emma Tammi’s film comes from the “emptiness” of this land, the insistence that nothing was there before these pioneers arrived, and nothing is outside their homes but them. The violence of colonialism, the displacement of Native tribes from their ancestral lands for these settlers, is never mentioned. The demons that are conjured are explicitly Christian, Biblical demons listed in pamphlets warning newcomers of the demon of the prairies, brought over by these newcomers.

There is certainly space for this still necessary revision, but the film instead focuses on the burdens of her gender. The foundations Elizabeth has, the home she and her husband made, their marriage, the life she was worked at so the two of them could be content in their solitude, is corrupted from within. The horror in The Wind is not the knock on the door, but coming from inside the house. Elizabeth is betrayed in the ways women so often are—in marriage, in lifestyle, and in body. And the horror of this betrayal becomes much greater than its source, tearing down what took so long to build.