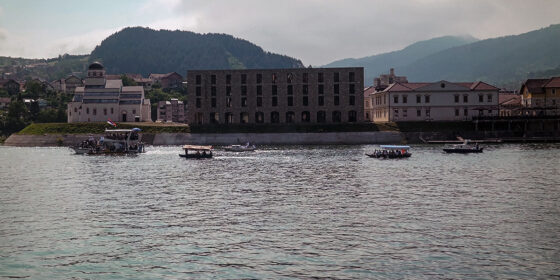 As in Krivina and The Waiting Room, Igor Drljaca explores identity concerns and still-dormant wounds inherited from the Yugoslavian Civil War in The Stone Speakers, his first documentary feature, in which the observational analysis of tourism allows him to explore nationalism by its manipulative fictional bases. With a clinical and distant approach at times reminsicent of Denis Cotê or Sergei Losnitza, Drljaca contrasts tourist destinations with the anonymous voices of locals who provide the necessary background to expose the flaws of national myth construction. This exploration on the tourism boom in Balkan region is given through the contemplation of four different geographical and conceptually constructed spaces with the superimposed historical, polítical, and religious loads extrapolated from offscreen testimonies. Drljaca also observes the consequent rituals—from pilgrimages to concerts or barbecues—in which the influence of imposed ideology on the individual is revealed.

By breaking time barriers with narrative mechanisms, The Stone Speakers places the past in the present to reveal the invisible and permanent subtext inherent in the transitory space. As we’re touring a holy site in which supposedly the Virgin Mary tends to appear, or the Bosnian Sun and Moon pyramids where mysticism and daily ethnic confrontation collides, we powerfully observe tourism and individuals at service of the construction of a collective imaginary focused on the re-edification of a still fragile nation.