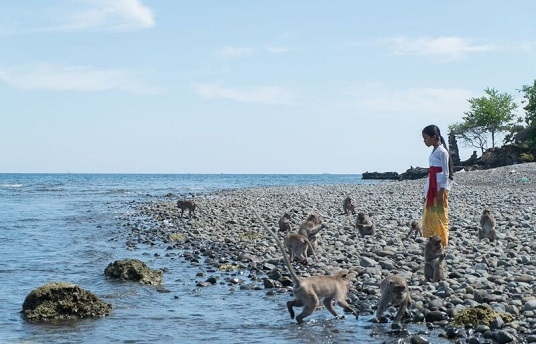 The Seen and Unseen is a truly singular film, but it does not relinquish its secrets easily. The story of two young twins, the girl Tantri (Ni Kadek Thaly Titi Kasih) and the boy Tantra (Ida Bagus Putu Radithya Mahijasena), who share an intense emotional bond that may extend beyond death, The Seen and Unseen is at times physically hard to decipher. For one thing, large segments of the film are dark, among the darkest passages I have ever seen in a narrative film. Only careful examination, and allowing your eyes to adjust, will yield an image, which is usually that of Tantri in silent meditation, alone on the material plane but supernaturally attended by a host of nameless ghost children.

Although director Kamila Andini is clearly trying to push narrative cinema to its limits, she is not doing so for the sake of mere provocation. The Seen and Unseen is a film about the liminal zone between the spiritual world and embodiment. Tantri is trying to cope with the fact that her brother is dying of a brain tumour; due to the pressure it places on his brain, Tantra has become blind, deaf, and incapable of feeling any sensation. This nightmare-existence, a kind of living death, positions him as a medium of sorts, a conduit through which Tantra can vicariously sense a secondary ghost-existence with Tantri. Is she imagining it? Is it a special bond between twins? Or is he reaching out to her from the other side? Much to Andini’s credit, she never clarifies the ontological questions raised by Tantri’s experience of “being” with Tantra.

Perhaps because of Andini’s willingness to bring the world of spirits into contact with the material world, in one single, continuous diegesis, the festival catalogue compares The Seen and Unseen with the work of Apichatpong Weerasethakul. While this is not entirely off-base, neither is it really accurate. Where Apichatpong’s films are fluid and hypnotic, Andini’s film is frequently static, asking the viewer to consider the sensation of a world that is winding down, slowly divesting itself of meaning. Compositions frequently place Tantra on one side of a wall or divider, with Tantri or her family on the other side, emphasizing her increasing isolation. Several shots show Tantri on a hillside in silhouette in the moonlight, resembling the cut-outs of Kara Walker far more than anything one would find in the cinema.

If there is anything that characterizes this mesmerizing film, it is a sense of absolute suspension. It can prove frustrating at first. But as Andini’s gradually unfurls her intentions, The Seen and Unseen justifies its tableau approach and lack of motility. This is cinema as flotation tank, and when it is done, the mere fact of embodiment—getting up out of your seat and greeting the ordinary world—may feel like a small gift.