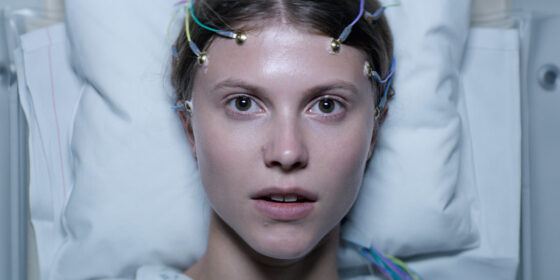 Joachim Trier makes a sterling if somewhat noncommittal bid for post-horror with Thelma, a slow-burn supernatural thriller about a Norwegian teen (Eili Harboe) who goes away to college (and away from her morally rigid Christian parents) and finds her long dormant powers to make terrible and strange things happen reactivated by, what else, her raging hormones. Trier spends much of the first act flirting with the many potential blurred lines between mental illness, religious extremism, repressed sexuality, and extrasensory abilities, being overly coy about the possibility—already well-explored in any number of horror films that lack Trier’s hang-ups about telling a genre story straight—that any one of these earthbound ailments might be causing Thelma’s peculiar, undiagnosable situation, which first manifests as non-epileptic seizures and gradually blossoms into full-on Carrie-style pyrotechnics. It’s no wonder the film takes off in its middle stretch when Trier sheds these unnecessary explanations.

When Trier allows his thriller elements to freely bleed into his austere aesthetic—as in eerie long shots of biblical animals slithering and swooping into scenes where they don’t appear to belong and voyeuristic bird’s eye-view tableaus that locate Thelma from above as if from a creepy supernatural handler’s telescope—Thelma is scary and potent stuff, its methodical pacing at last feeling mesmerizing rather than slack. It helps that Harboe is as adept at rendering Thelma’s aloofness in the early moments: her lovesickness over a female classmate that throws her self-image into turmoil, and her anxiety over what’s coming over her, bring some much appreciated nuance and poignancy to a very familiar character type. It’s a shame Trier loses some of this narrative momentum from his star’s performance in the overwritten finale, another overly talky affair that explains away the heroine’s mysteries rather than simply letting them manifest themselves in the campy blowout the material invites.