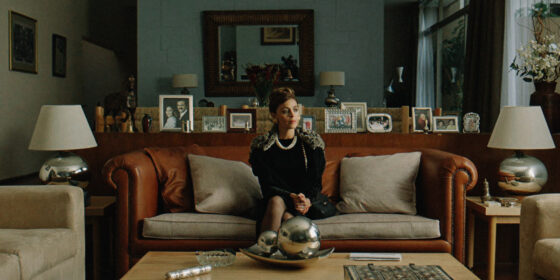 In 1983, a year after the most shocking economic crisis in Mexico’s recent history, the writer and journalist Guadalupe Loaeza published in a now-defunct national newspaper an article that enunciated, with clinical description, a compendium of young, unconscious, and shallow bourgeois women of that time that could be categorized, ironically, under the term “good girls.” Years later this article would become a book that sought to unravel the ideology—or the lack thereof—of those belonging to the upper stratum of Mexican society.

Since the world has not changed much over 30 years, Alejandra Márquez Abella returns to Toronto after her debut, Semana Santa, with a loose adaptation of Loaeza’s book. Márquez Abella builds through this reference the story of Sofia (Ilse Salas), an affluent and well-off woman who, as a result of the country’s crisis, as well as her and her husband’s (Flavio Medina) work and emotional disabilities, passively observes how their gold house of cards collapses.

Contemplating wealth as synonymous with elegance and aesthetic beauty, and by way of a fluid, temporarily intersected narrative, The Good Girls portrays the decline of the way of life of irresponsible, capricious, and passive individuals like Sofia—an emotionally content character clinging to her privileged condition, blinded by a bandage that she refuses to remove, whose frivolity and reflective incapacity inhibit her from ever letting go.

Even though the analysis of the deep economic and class problems that take place in Mexico and their diverse consequences are now hot news in the Mexican cinematographic sphere (also at TIFF: Cuarón’s Roma, Aviles’ The Chambermaid or Reygadas’ Our Time), Márquez Abella offers a film that seeks to distance itself from empathizing with its sometimes ironic but never patronizing portrait of the usual victimizers, with the idea that they can be considered victims too.