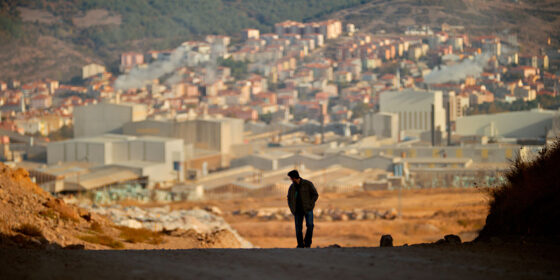 It wasn’t too far into his filmography that Nuri Bilge Ceylan began to express a sense of petulance (albeit in the form of waggish self-reflexivity) regarding his own growing reputation as one of the major heirs apparent to an older tradition of modernist cinema. In his breakthrough Distant, the film’s protag played Stalker to his visiting cousin in a calculated effort to bore him to sleep so he could watch porn on his own; Climates upped the ante by opening with its subject, a photographer played by Ceylan himself, asking “Are you bored yet?” to his girlfriend (played by Ebru Ceylan, his wife and co-writer since Three Monkeys in 2008) as they mill about ancient ruins while holidaying.

The combativeness of such moments perhaps finds a correlative in the overall shape of his filmography. The Wild Pear Tree finds Ceylan(s) settling into the loquacious, chamber-drama mode established in Once Upon a Time in Anatolia and taken further with Winter Sleep while mostly disavowing the pictorial beauty of his earlier films in favour of a more flattened digital aesthetic (complete with intermittent drone footage of the surrounding landscapes). The formal departure is fitting: more than any of Ceylan’s previous features, this is a coming-of-age film, centred on the surly, hunched-over Sinan (Aydin Doğu Demirkol), a recent graduate and aspiring writer who returns to his family’s rural village, where resentments toward his compulsive-gambler father Idris (Murat Cemcir) come to a head.

“People should just go with the flow of time”, Idris tells Sinan late in the film, a casually ambiguous tip that encapsulates a pervasive, free-floating unease with the present moment (cultural, political and otherwise—baldly represented in a patriarch’s gambling problem jeopardizing his family’s future) that ferments over the course of the film’s wordy three hours. Simultaneously static and ambulatory, Sinan spends much of the time trying to find a publisher for his ambitious novel, from which the film takes its title—another self-reflexive move on Ceylan’s part, who has succeeded in translating to screen the experience of being engrossed by a particularly discursive, verbose, and occasionally hubristic novel.

The Wind (Emma Tammi, US) — Midnight Madness What You Gonna Do When the World’s on Fire? (Roberto Minervini, Italy/US/France) — Wavelengths