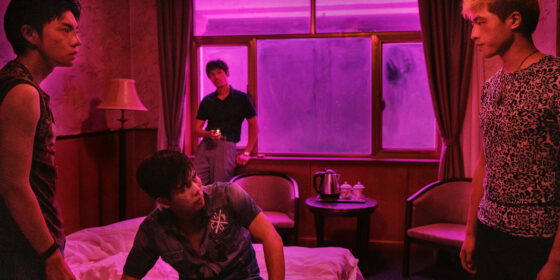 In his new crime thriller, Diao Yinan returns to the noir tropes and bleak atmosphere of his 2014 Golden Bear winner Black Coal, Thin Ice to tell the story of on-the-run cop-killer gangster Zhou Zenong (Hu Ge), who gets involved with a mysterious prostitute, Liu Aiai (Gwei Lun-Mei). The film begins with their rendezvous at a rainy, secluded train station: Zhou is waiting for his estranged wife, but Liu shows up instead, claiming that she wants to help him to find his partner, who has gone missing. Together, they start a journey towards the notorious lake of the title, as Zhou, a man with no future, struggles to arrange things so that his wife can collect the bounty on his head, while Liu, a broken woman, does anything to survive without violating her own innate sense of  righteousness and decency.

Beyond the overtly stylized visuals and exhilaratingly violent set pieces that are reminiscent of the Coens and Tarantino, Diao once again delves into the all-devouring capitalism that defines modern China. The characters, their motives, and their actions are all built around the reward money for Zhou’s arrest (which is certainly more Coensesque than the offhand violence). The characters wander through the film’s godforsaken spaces as if they had already resigned  themselves to their inevitable fates, Diao’s camera floating between them in long takes as he establishes an enigmatically menacing mood. The nocturnal open-market sequence is the best example, an amalgam of shadows and light, silhouettes and bodies, bright colours and bloody fights.

Zhou is a walking zombie who finally rides on a boat with Liu in the ghostly lake (a scene which recalls Mizoguchi’s Ugetsu); his heart is bleeding and her face is beguilingly calm, a haunting depiction of an impossible romance. In their bizarre company, loyalty also means betrayal, which makes a final chase through  the narrow streets deeply poignant and emotionally perplexing. Despite of all its cruelty, the last scene can be read as a sign of hope, as two women peacefully walk together as if protesting against the ruthless patriarchy of their homeland—it’s a final glimmer of light in an otherwise unrelentingly dark vision.