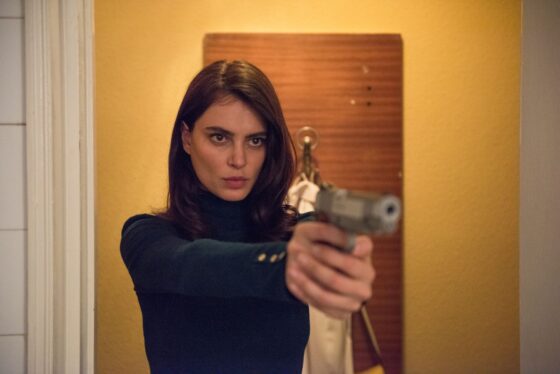 An entertaining film-festival outlier, Corneliu Porumboiu’s The Whistlers seemed to have been punished at Cannes for being a change of form for Porumboiu: it’s a rollicking film that, on its surface, doesn’t appear to fit into any dominant narrative, whether we are talking the historical development of the Romanian New Wave or current international art-house output in general. The Whistlers casts a very staid Vlad Ivanov as Cristi, a cop deep into a drug ring and under police surveillance, who has fallen for a femme fatale aptly named Gilda (Catrinel Marlon). In a typical instance of Porumbouian absurdity, Cristi journeys to Gomera to learn El Silbo Gomero—the whistling language native to the Canary Islands—primarily to help a mob boss extricate a snitch, but ends up using it for personal gain. It might be my imagination, but I swear Porumboiu told me Romanian football referees got a hold of the whistling language to figure out how to fix matches; if I’m making this up, well, it might as well be true.

Alas, football is the only one of Porumboiu’s usual fascinations that’s missing from the film, one in which almost every single character is, at some point, knowingly playing a role for another. It’s auteurist cinema of the best kind, as Porumboiu takes the genre trappings of the old-school international policier/heist film and invests in it his foremost concern: the attempt to escape from the control of the dominant forces of society by way of language. The Whistlers is a fast-paced cinephilic treat, and shows that Porumboiu is capable of working on a grander scale, production-wise: give this man a Bond film, though maybe not if he brings along Vlad Ivanov (I’m all in for Catrinel Marlon, though).