The Turning of the Earth: True Grit 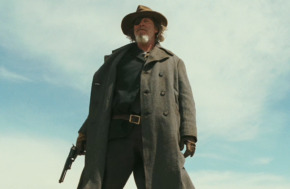 There’s less Henry Hathaway than Robert Benton about Joel and Ethan Coen’s True Grit. Where Hathaway’s genial, serio-comic 1969 adaptation of the Charles Portis novel—about a headstrong, loquacious fourteen-year-old girl who hires a paunchy, drunken but ferocious U.S. marshal to hunt down her father’s killer—placed its lampooning/deification of John Wayne-as-Rooster Cogburn against a lush Technicolor backdrop of blue and green wilderness, Roger Deakins’ leached-out colour schemes and the arid, unappealing flatlands of the Coens’ version evokes Benton’s underappreciated Bad Company (1972), which starred Jeff Bridges as a juvenile delinquent of the plains who discovers the harsh cost of his playing at outlaw.

Beyond the visual similarities and the casting of Bridges, who ably fills the boots of Portis’ trigger-happy, barely reconstructed freebooter, the Benton and Coen films also share a similarity of tone and outlook: a pronounced streak of ironic humour, a bleak picture of life in the Old West as nasty, brutish and short, and yet a subtle undercutting of that demystification by an insistence that the gunslinging superheroics of the dime novel heroes did indeed find some basis in grim reality. In Bad Company, resigned outlaw chieftain David Huddleston briefly interrupts his stroll to the hanging tree to demonstrate his inhumanly fast speed-draw for the benefit of the posse; in True Grit redux, even though Rooster can hardly stay on his horse for cause of imbibing, he can still shoot a piece of cornbread out of the air and, in the anticipated finale, ride down four outlaws in a head-on charge with reins between his teeth and two guns blazing.

That famous climax, the most memorable scene of Hathaway’s pleasantly forgettable trifle, is tellingly the only scene in l’edition Coen that falls flat in comparison; while Bridges may be assuming his own kind of iconhood of late, no actor can mouth the words of Wayne without appearing a mere stripling. What this scene also indicates, however, is the unsure pitch of the film throughout even as nary a moment passes that fails to amuse or (at the very least disinterestedly) impress. Unlike Benton, whose revisionist effort consciously set out to upend the pieties and clichés of the genre—through both its deflationary humour and the sudden, shocking bursts of violence that had punctuated Bonnie and Clyde (1967), for which he wrote the screenplay—the Coens have no target of either parody or homage. Indeed, for all the historical and generic pastiche they have trafficked in over the years, they rarely seem to have an explicit model to which they are referring. (Obviously excepting their first straight remake, the maladroit The Ladykillers [2004].) In some ways, The Hudsucker Proxy (1994) could be the prototypical Coens film, its heedless mash-up of verbal, visual and iconographical tropes from the ‘30s through to the ‘50s both effacing the past and ruthlessly exploiting it as an (ultimately unreadable) reference point.

While some critics have cited the Coens’ glib ahistoricity as further proof that they have nothing to offer but contempt, there is also, dare I say, a germ of artistic merit in this distance from their forebears. Though they are film brats to the core, the anxiety of influence has little bearing upon the Coens’ world. Evincing neither reverence or rejection towards their cinematic heritage, the films follow their own bizarre (if sometimes rotely bizarre) internal logic while their scattered cinephilic signifiers—the Sturges-riffing title of O Brother, Where Art Thou? (2000), the loose-limbed, endlessly digressive Chandler lampoon of The Big Lebowski (1998), the glib caricatures of Faulkner and Odets in Barton Fink (1991)—simply float free of context. At their best—which is to say their last film, the much-maligned A Serious Man (2009)—the Coens attain a level of abstraction where their influence from cinema past is both discernible and unplaceable; an absorption of influence rather than a display of same, something akin to what P.T. Anderson achieved with the quantum leap of There Will Be Blood (2007). The winking title of their brilliantly funny semi-pseudo-non-autobiographical rumination aside, the Coens’ perpetual tongue-in-cheek aesthetic is curiously adaptable to seriousness, which made No Country for Old Men (2007) a thoroughly recognizable Coens film even as it is utterly unlike anything they had previously attempted.

Like that over-praised and over-determined (if brilliantly executed) effort, True Grit, for all its Bridges clowning and eccentric verbality, is essentially played straight, without any undue gravitas but with a strangely sideways kind of conviction. Other constants are in place as well: where the film of No Country broke their usual mold somewhat by transmuting Cormac McCarthy’s elaborate prose into terse visual language, the pairing of Portis’ child-eyed narration with the Coens’ familiar love of verbal archaism and esoterica is almost too nice a fit. The hyperformal speech of unflappable adolescent heroine Mattie Ross (Hailee Steinfeld, pitch-perfect), when coupled with the no less high-flown sentiments of prissily self-impressed Texas Ranger LaBoeuf (Matt Damon, trying hard) and the vulgarly monosyllabic undercutting of Cogburn’s growled ripostes, produces some reliably amusing verbal pyrotechnics. The typically capable handling of violence is here as well, alternating between up-close nastiness (cf. a sudden, digit-severing explosion at a kitchen table) and distanced, dispassionate restraint: a brusque, businesslike triple hanging after the observance of final testimonials from the condemned (abruptly cut off in the last case), or two long-distance bushwhackings viewed primarily from behind rifle sights.

Beyond these familiar touchstones, however, is an odder, intermittently recurring trope, the emphasis on dead space and dead time that is the inverse of the Coens’ hyperactivity. There’s a slightly off, affectless pacing about True Grit that is less pleasant languor than existential emptiness. For all its flatness, the grey landscapes through which the pursuing trio of Mattie, Cogburn and LaBoeuf pass seems capable of swallowing whole those straggling humans who venture into it (literalized in the climactic sequence where Mattie tumbles down into an unglimpsed, snake-filled pit). Where Wayne in The Searchers (1956) declared that he would find his hated Comanche quarry as sure as the turning of the earth, in True Grit the bedraggled, half-stupid back-shooting killer Tom Chaney (a late-arriving, amusingly marble-mouthed Josh Brolin)—assumed to be travelling in the company of outlaw chief Ned Pepper (a near-unrecognizable Barry Pepper)—can vanish with dispiriting ease; when Rooster’s hunch about the gang’s whereabouts seemingly proves wrong, the matter-of-fact hopelessness is amplified by the vast echo chamber of the empty wilderness.

Yet when, inevitably, Chaney is run to ground (quite by accident), the eventual retribution that is doled out is almost as unsatisfying as was its initial frustration—a deflating feeling that is quite in line with the absurdist—in the Beckettian sense—ethos that the Coens have been steadily moving towards, however glib it may sometimes be. The surety of the epigraph’s biblical injunction—“The wicked flee when none pursueth” (though it excises the following, Rooster-applicable line: “But the righteous are as bold as a lion”)—dissipates in the face of the film’s steadily attenuated urgency. There’s an essential stasis to the Coens’ films that stands as the internal negation of both their hyperbolic grotesquerie and that lockstep determinism which comes in concert with their tyrannically precise formal control (the latter two of which reached their mechanistic acme in No Country)—recall that their signature hero, Bridges’ Dude, finds his heroism in apathy and signal ineffectualness.

Perhaps this is why Bridges’ two-gun charge rings rather hollow: its forward-driving validation of Rooster’s unlikely heroism is tonally at odds with the Godot-esque bafflement in the face of an inscrutable universe that has come to define the Coens’ work. The curious, not-quite-there epilogue of True Grit illustrates this uncomfortable tension between narrative and sensibility: collecting a coffin as she did at the film’s beginning, a now-grown Mattie ruminates on the speedy passage of time even as her own life has evidently remained at a standstill. There’s a grimly poetic idea here that is not quite earned by what precedes it. The slipperiness that keeps the Coens productively free of the equally easy answers of a Hathaway or a Benton also keeps them always just this side of meaning.