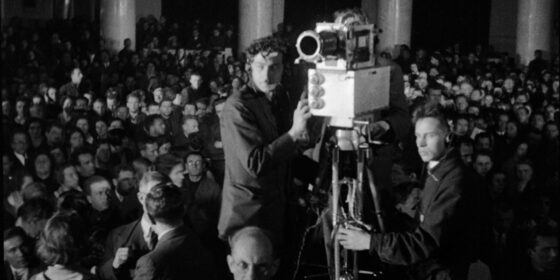 Following the conflicted reportage of Victory Day and the fictional portmanteau of Donbass, Sergei Loznitsa delivers a third 2018 premiere with The Trial, an in-the-gallery documentary account of one of Stalin’s infamous Moscow Trials. Returning to primarily found-footage materials for the first time since The Event (2015), Loznitsa linearly condenses an 11-day show trial hearing from 1930 into just over two hours, alternating bureaucratic procedure and fabricated testimony with brief snippets of popular demonstrations against French Prime Minister Raymond Poincaré (identified as a co-conspirator of the accused in their alleged efforts to undermine the USSR). Giant spotlights illuminate the meticulously documented courtroom proceedings; crowds mill about, their faces a mix of boredom, perplexity and fascination; the accused stand as witnesses against themselves.

The film’s contemporary resonance is no accident, and its title’s invocation of Kafka even less so. But what the industrious Belarus-born director has created is a profoundly (and productively) contradictory object that resists easy topicality: a fastidiously researched, nonfiction account of a fastidiously composed fiction, and hence a canny inversion of the courtroom drama template. The emphasis is not on the outcome (the imprisonment and/or execution of the accused), but on the minute, ontological facts of the event itself: lengthy statements delivered in affectless, rapid-fire succession; glasses of water clumsily changed by a guard; the specific syntax of the final sentencing (“…as the supreme measure of social protection…”). Across its alternately absorbing and numbing runtime, The Trial thus yields to more fundamental questions of image and spectator—concerns that have informed much of the director’s documentary practice. Here, Loznitsa’s treatment of the footage (and the natural assumption of a contemporary audience) empties the proceedings of its human drama and effectively transforms the trial into pure, uninhibited process—spectacle weaponized for an entirely different purpose. “Give me a lever, I’ll move the world,” says one of the accused in his personal statement, (incompletely) referencing Archimedes as he pleads for his life. With The Trial, Loznitsa has orchestrated a move from historical survey to vicarious comprehension.