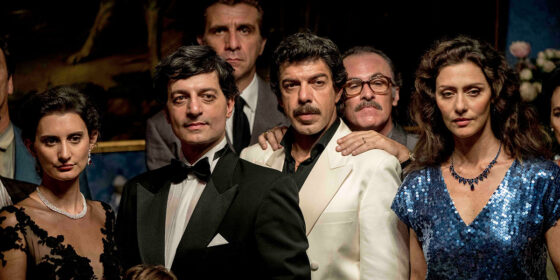 “The most beautiful film is our own history,” confessed Marco Bellocchio to a journalist following the release of The Traitor, after it surpassed Godzilla: King of the Monsters at the Italian box office, proving yet again that the Mafia movie is still a commodity worth investing in. While the adjective “beautiful” might be up for debate, it’s undeniable that the history of postwar Italy is richer in plot twists, tragicomic exploits, and violent assaults on the established order than your average Hollywood blockbuster. For better or worse, Italian screenwriters can rely on an ever-growing database of (sur)real stories that the most fervid imagination would have a hard time coming up with. And as the accurately depicted scenes of the Maxi Trial of Palermo in The Traitor show, Italians retain their knack for comedic antics in the most dire and dramatic situations, the court of law being no exception. Even the darkest chapters of Italian history are often festooned by clownish episodes where the fine line separating sheer genius from pure idiocy is indeed hard to tell.

It is precisely these surreal episodes that have more to say about the history of Italy than its grand narratives. Bellocchio in fact is hardly interested in the historical dimension of the Sicilian Mafia or that of its protagonists: on the contrary, he explores the phenomenological tics of their lives and, as always in his cinema, the Oedipal folds of their psyche. The Traitor discreetly tails the title character, Tommaso Buscetta (mimetically impersonated by Pierfrancesco Favino), the very first Mafia boss to turn informer. Whether Bellocchio’s story is fictionalized or factual is beside the point: as in Good Morning, Night (2003), the director distorts the original records of history for his own purposes. History in his films is always seen and told through the lens of subjectivity, not because he believes that individuals are the makers of history, but because our perception of it is inevitably subjective. It’s for this reason that drawing a parallel between The Traitor and the films of Francesco Rosi is ill-advised. Rosi investigated reality and its affairs, be they current or historical, in order to denounce the official version—to expose injustice and even fight it. Bellocchio is not interested in debunking; quite the contrary, as his Buscetta is to a significant extent the romantic, fictionalized version that the actual Mafia boss believed himself to be, or at least wanted the public to believe he was.

The movie takes place at a crucial juncture of the recent history of the Mafia in Italy, when the rise of the Corleone clan in the ’80s did away with the Bontade, Inzerillo, and Badalamenti families. As Ronald Reagan and Margaret Thatcher did in the US and the UK respectively in relation to economic policy, so the Corleones in Sicily presided over the neoliberal turn of organized crime: no longer territorially bound, the Cosa Nostra’s Sicilian roots melted into the global flows of capital as the Palermo of the ’80s became one of the epicentres of the drug trade worldwide. It was against this break with tradition (and the adding of heroin to the Cosa Nostra’s portfolio) that Buscetta allegedly “revolted,” deciding to collaborate with justice. “I’m still an honourable man,” Buscetta tells the magistrate Giovanni Falcone (Fausto Russo Alesi). He represents the real Mafia, the one that protected poor people; they (the new guard) have betrayed the unwritten code of honour which he, and he alone, still obeys. In Buscetta’s mythological view, the new guard betrayed the “true values” of the Cosa Nostra, not him; he’s not the traitor, they are.

While born on the ruins of poverty and underdevelopment, the Mafia never helped the poor, let alone defended them; if anything it exploited them, like any other business enterprise would. Organized crime, in Sicily as elsewhere (see The Wire), profited off of poverty and can now be found in the highest accumulations of capital: finance, public infrastructures, and real estate. Buscetta’s noble excuse, for all we know, might have been a reputable exit strategy for someone who, having grown accustomed to the lavish lifestyle of a Copacabana expat, could not face a lifetime in prison. (Lovers of conspiracy claim that informers are nothing but pawns in the manipulative hands of the Mafia itself, merely serving the logic of their internal power struggles). What is certain is that informers, the protagonist of The Traitor included, start talking after their arrest—which is why Buscetta’s claim that he ratted on his former colleagues because the Cosa Nostra wasn’t what it used to be anymore sounds preposterous, to say the least. But factual truth isn’t what Bellocchio wants to stage: rather, he’s interested in the ordinary unfolding of a supposedly epic life whose narrative peaks are frustrated by anti-climactic counterpoints. The film is dynamically suspended between the pathos of rise and fall and the monotony of daily life, though punctually subdued and understated; it flows like a Homeric poem. What is rendered in aesthetic and narrative terms reflects a vision of men cornered by events despite their status.

The characters of Bellocchio’s cinema are always dwarfed by history, like Mussolini and his illegitimate son in Vincere (2009). For all his historical weight, Buscetta ultimately follows a script he hasn’t written. His confession to Falcone across a desk divides them symbolically, each on a different side of the law. While on trial, he sits next to his former colleague Pippo Calò (Fabrizio Ferracane), literally sharing the stage on which their dissension is acted out, loudly and flamboyantly. The court of law is turned into commedia dell’arte, and it’s in this particular regard that Bellocchio’s oneiric trademark, which has usually brought the surreal out of the real, is almost surpassed by reality itself, and thus “forced” back into the folds of realism. Rather than the “most beautiful,” Italian history is the most improbable: Italy is possibly the only country of the so-called first world within which a supposedly developed democracy coexisted and eventually merged with a criminal organization the likes of which are usually associated with underdevelopment. In dramatic terms, this political anomaly has gifted Italy with an arsenal of poetic devices, thanks to which the difference between the scripted and the improvised has often vanished. Things in Italy (and in the film) can simultaneously be tragic and yet never serious, bloody but still farcical. Deflated of their aura, the family wars that restructured the hierarchy of the Cosa Nostra in the early ’80s are as breathtaking as a company merger agreed upon in front of a corporate lawyer.

The only victim of this violent farce, more than an imaginary democratic order, is the romantic notion of the family that even today permeates the rhetorical idea of Italy. Blood in The Traitor is not the sacred bond through which criminal business is conducted, but its expendable currency. Buscetta has two families, one in Sicily and one in Brazil, and both of them are incidental to his professional trajectory, at times even obstacles: when a business associate begs him to return to Sicily before his enemies take it out on his family, Buscetta instead stays put in Rio de Janeiro, fully aware that his relatives will pay the price for him. Family in his calculations is never a priority, always an afterthought: as Friedrich Engels outlined in The Origin of the Family, Private Property, and the State, familial bonds in the Mafia are transactional functions that can be reconfigured at any time, like the organizational chart of a corporation.

Once Buscetta starts collaborating with the justice system, his Sicilian family disowns him. “He’s not a Buscetta anymore, he’s not worthy of his name,” his sister shouts to the reporters crowded at her doorstep. The love and loyalty of his Brazilian family are simply dictated by contingencies, as much as is the hatred of his Sicilian family. The family is, for all intents and purposes, a moralistic cover that is blown every time its financial rationale ceases to make sense. Disingenuously framed in ethical terms, the Mafia is primarily a mercantile phenomenon, and its folkloristic ornaments have in fact changed along with the global economy. If anything, Buscetta represents the anthropological passage from a Cosa Nostra historically linked to a territory and its customs to one projected onto the global stage, freed from the burden of tradition and free to mingle with other “respectable” forms of business. Whether naively or opportunistically, his refusal to embrace the new era is only valuable as a narrative device, one through which this epochal change is observed with analytical detachment.